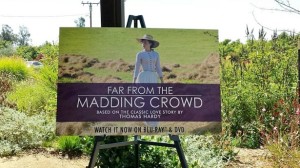 Two weeks ago, my daughter & I arrived at Apricot Lane Farms, located in a sleepy town just 45 minutes north of Los Angeles to celebrate the Blu-Ray/DVD release of Far From the Madding Crowd. The movie is set in England during Victorian times & is based on Thomas Hardy’s book of the same name, Far from the Madding Crowd. The film stars Carey Mulligan (who I’ve liked since she played Winnie Gekko in Wall Street: Money Never Sleeps) … END_OF_DOCUMENT_TOKEN_TO_BE_REPLACED