This past October I attended LA Comic Con in downtown Los Angeles. It was during the convention that I got to meet Tom Bilyeu, Co-Founder & CEO of Impact Theory, where we discussed their new comic book, Neon Future! Impact Theory had just debuted Neon Future a few weeks earlier on October 4th at New York Comic Con. Now it was time to introduce West Coast audiences to this futuristic sci-fi series featuring DJ Steve Aoki. If you’d like … END_OF_DOCUMENT_TOKEN_TO_BE_REPLACED 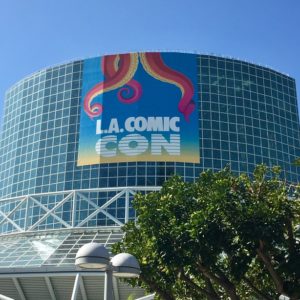 LA Comic Con took place during the last weekend of October in downtown Los Angeles. So many people swarmed the LA Convention Center to take part in this annual event. This was the 8th edition of LA Comic Con & organizers were calling it their Octoversary! I headed to DTLA on a Friday morning so that I could experience the convention. One of my favorite things to do at conventions is to people watch. I enjoy seeing the costumes … END_OF_DOCUMENT_TOKEN_TO_BE_REPLACED