This past October I attended LA Comic Con in downtown Los Angeles. It was during the convention that I got to meet Tom Bilyeu, Co-Founder & CEO of Impact Theory, where we discussed their new comic book, Neon Future! 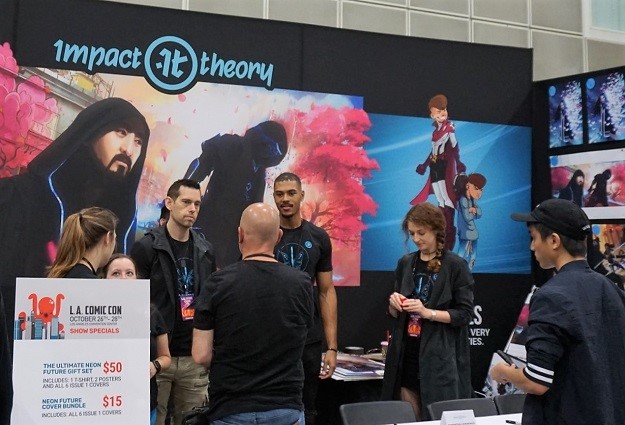 Impact Theory had just debuted Neon Future a few weeks earlier on October 4th at New York Comic Con. Now it was time to introduce West Coast audiences to this futuristic sci-fi series featuring DJ Steve Aoki. If you’d like to get a taste for what this comic book is about, you can watch the trailer for the comic book below!

I wanted to know how Neon Future was “born” & how Steve Aoki came aboard the project. It turns out that Tom has a podcast show called “Impact Theory” & DJ Steve was a guest on the show. It was during the show that Steve Aoki revealed that he wants to be cryogenically frozen when he dies.

Needless to say, Steve & Tom instantly clicked during the podcast as they are both very techno-optimistic. What does that mean? After my interview with Tom, I looked up the definition online & read the following, “techno-optimists believe that science & technology will help make the world a better place.”

Once Tom realized that he wanted to create a brand-new comic book, Impact Theory pitched the idea to Steve. The theme was based loosely on Steve’s album, Neon Future. Once they had a backstory, Tom hired Jim Krueger, an Eisner Award recipient for Best Graphic Novel, who then hired two additional writers – Samantha Levenshus & Dana Brawer.

It was important to the Impact Theory team that the comic series is authentic & from Steve’s world view. He’s been intimately involved with the creative process & was influential with picking the artists.

Said Tom, “Impact Theory is doing six Neon Future issues but depending on the response, it could go up to 18 issues. Right now, three comic book issues are scripted, two are completed books, the third is a finished script, the 4th is a rough draft, and issues five & six are outlined. The overall arc is done for all 18 issues.”

Following my interview with Tom, I got to meet with the Neon Future writing team. Jim Krueger said that he interviewed about 30 writers, ultimately hiring Dana & Samantha. Said Jim, “They [Dana & Sam] knew how to write scripts well & they got along well.” 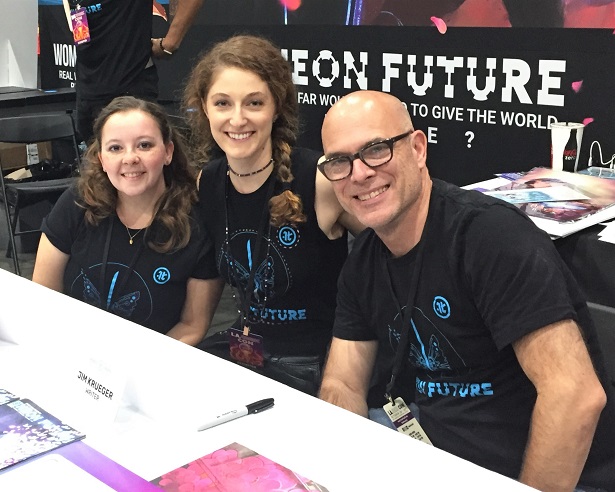 Although Sam & Dana are not writing partners, they have several things in common. They both come from the world of TV, having worked together in the writers room on the new George R.R. Martin TV show called “Nightflyers.” More importantly, they both love to read comics!

According to Dana, “We come from a TV background. We also both love comics & read comics.” So when they got the opportunity to write for Neon Future, their first comic, they leapt at the chance.

On a side note, while it’s common to have writers rooms for TV shows, it’s virtually unheard of to have one in the comic book industry. Jim, Samantha & Dana really pioneered the idea of having one at Impact Theory, saying “We go through all of the lines to make sure the dialogue for each character makes sense.” They feel that this process makes the Neon Future scripts better.

Dana said, “Each issue is gets better with every iteration that we do of it until we find our final product. It’s very collaborative & a lot of fun.” Samantha added, “Tom set-up a great working dynamic early on. It’s a very honest environment. If you’re passionate about something, then we have a dialogue about it.”

I mentioned to Samantha that I thought it was great to see women writers in the comic book industry. Last year I met Mairghread Scott, head writer from Marvel Rising: Secret Warriors, & now these two incredible female writers – I think it’s just awesome to see girl power in what is thought of as a male-dominated industry.

Said Samantha, “In the last few years, I’ve seen more & more women in the industry, at these conventions & even at the comic book store that I go to. As more comic books are introduced to schools, then the more girls will grow up reading it & the more excited they will be about this art form.”

Disclosure: No monetary compensation was received for this post. I attended the event as a member of the media which helped facilitate this review. All images & opinions are 100% my own.