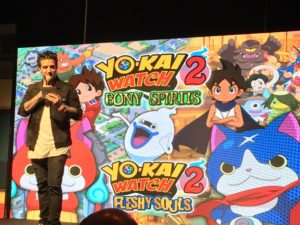 Yo-kai Watch is such a popular Nintendo 3DS game, that when it came time to develop a sequel, Nintendo decided to create two versions of this role-playing video game. On September 30th, Nintendo will release Yo-kai Watch 2: Bony Spirits and Yo-kai Watch 2: Fleshy Souls! Last week I attended a media event where I was schooled on all things Yo-kai. Mark Ballas of “Dancing with the Stars” kicked off the festivities. Mark is a huge Yo-kai Watch … END_OF_DOCUMENT_TOKEN_TO_BE_REPLACED