Yoda once said, “Speed Matters Not, young padawan.” Ok, so maybe he didn’t say that & furthermore, I’m not young or a padawan BUT I did find this amazing shirt at the runDisney Health & Fitness Expo last Friday.

My original race outfit for the Inaugural Star Wars 10k was running pants & a Star Wars shirt. However when I saw this shirt at the Raw Threads booth, I just knew that I had to have it! I’m not a fast runner, more of a steady-paced jogger. Being that I was in Corral D, I felt that this shirt spoke to me. This was going to be my mantra to help me get through the race! Not only that but this was a moisture wicking shirt made with a blend of bamboo & organic cotton. The Star Wars tee that I had bought online last month wasn’t going to cut it in terms of the sweat factor.

While at the Health Expo, I checked out the different booths. I came across the official runDisney running shoe made by New Balance. What do you think? It’s very subtle. Some fans that I talked to said they liked that it was a neutral color because the shoes would match with everything. Personally I prefer colorful running shoes, but that’s just me. 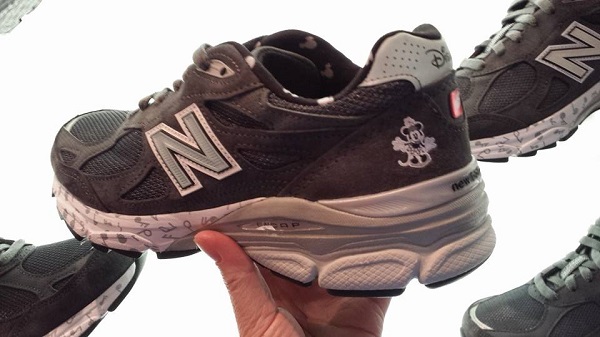 There were photo opportunities abound at the health expo. At the runDisney Instagram booth you could choose between two backgrounds. I chose to be in front of the Death Star. There were also two backdrops in the lobby of the convention hall.

On Saturday morning, I woke up before dawn to get dressed in my race outfit. I boarded the shuttle bus at 4:30am, still bleary-eyed but excited. After getting dropped off at the Disneyland Resort Transportation area, it was a quick walk through Downtown Disney to get to the corrals.

After I got to Corral D (which I like to think of as “D” for Disneyland Drive) I ran into my blogger friend, Camille Dashana of Sparks of Magic. It was so nice to chat with Camille while we waited for the race to start, as it kept my mind off of the fact that my legs were so cold. I don’t remember it being this cold last year when I ran the Never Land 5k. (Note to self: Must wear leggings under a race skirt next time!) 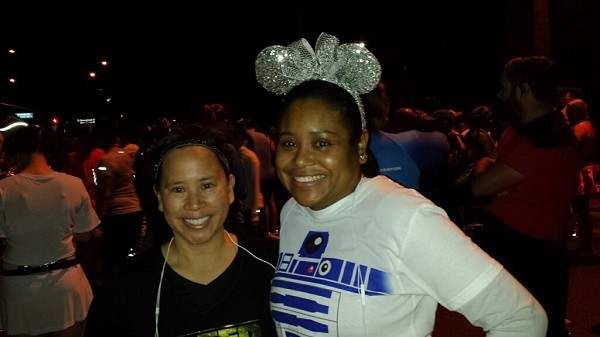 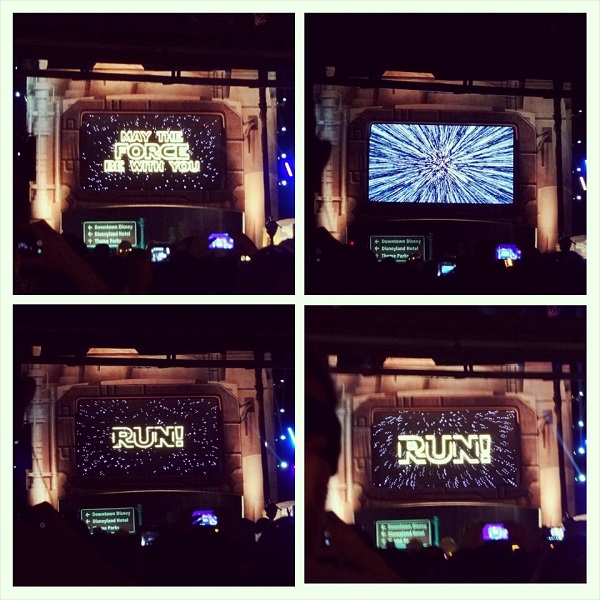 Then we were off! The course took us up Disneyland Drive, down Ball Road (we jogged on the overpass & could see the 5 Freeway below) & down Harbor Blvd before we finally got into the parks. As we headed down Main Street, I stopped for the obligatory selfie in front of Sleeping Beauty’s Castle. 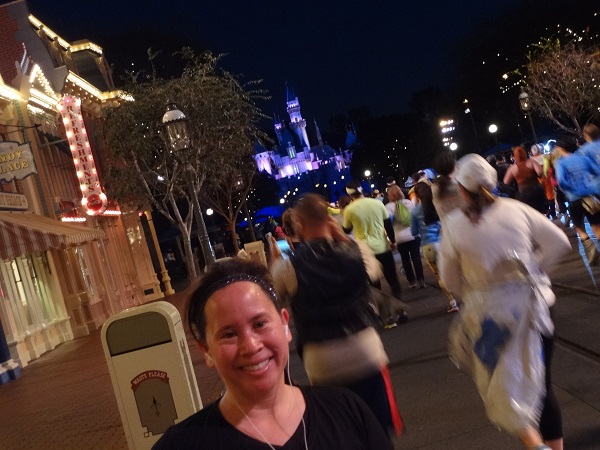 Just before Mile 3, I paused to take a photo in front of Small World. 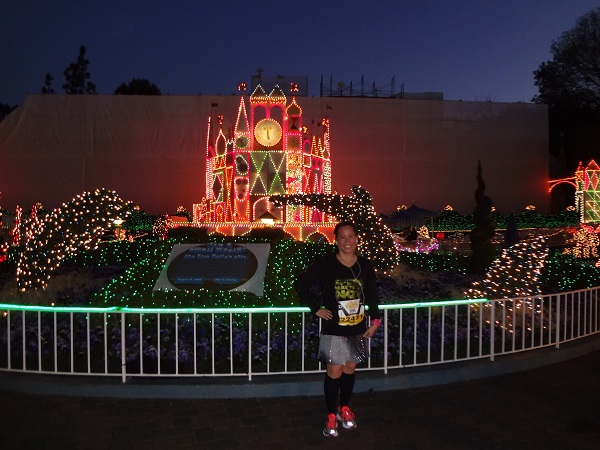 At the 3 Mile Marker, runners were greeted by R2-D2 who was hanging out in Dagobah.

This cool backdrop of Cloud City was at Mile 4. At this point in the race, I was somewhere between Disneyland & California Adventure. 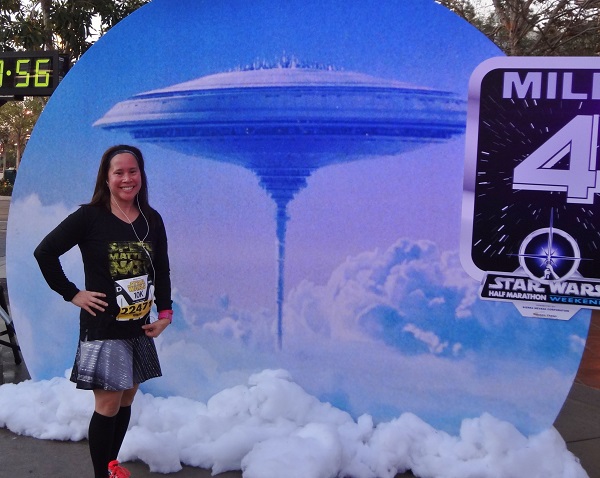 Over at the Hollywood Backlot, in front of the Hyperion Theatre, was Sabine & Ezra from Star Wars Rebels. The line for this character meet & greet wasn’t exactly the shortest, but it moved quickly. Plus my daughter is a big fan of the Disney Channel TV show, so I couldn’t resist. 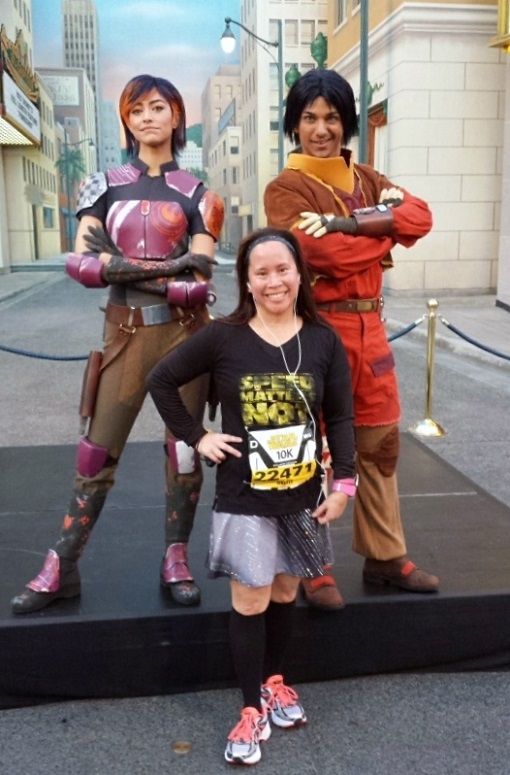 Hanging out on Paradise Pier, between Mile 4 & 5, were some Jedi. Fortunately the line was short at this photo opp because there was NO WAY I was going to pass this up!! 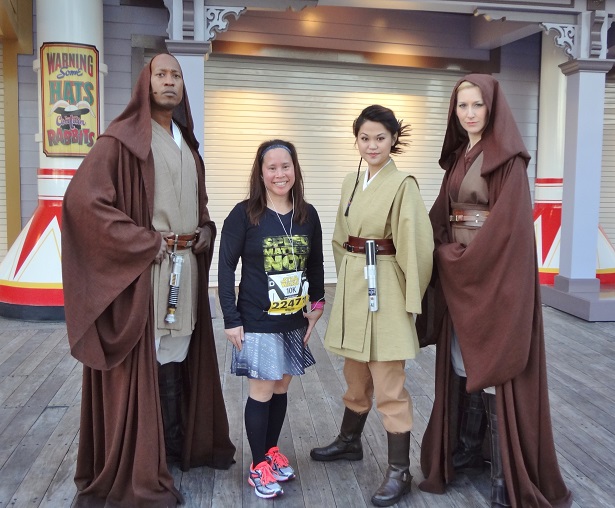 Whoo hoo, I made it to Mile 5, selfie time with the Millennium Falcon!

The line was super long for Mile Marker 6. As much as I wanted to take a picture in front of Jabba’s Palace to commemorate  the (almost) end of the race, I just paused to take a pic & jogged on. 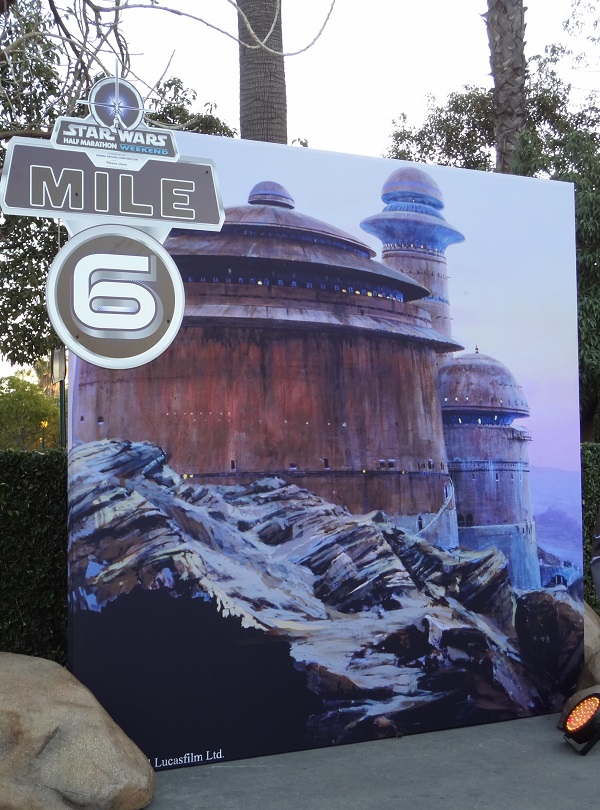 Finally I made it to the finish line where the Storm Troopers were waiting!

I completed it in 90 minutes (give or take). I didn’t beat my time from the Disneyland 10k back in August, but that’s ok. I just had too much fun enjoying the Star Wars experience! I have to say though that although I ran faster during the August race, my legs weren’t as sore afterwards this time around. I credit my leg strength to those extra workouts that I’ve been doing the past 5 weeks at Pilates Plus! In fact, the only pain I had was my left knee which probably could have been avoided had I remembered to tape my knee. I did remember to use KT Tape on my feet though!

For me, runDisney races are not about the finishing time (remember…Speed Matters Not). It’s all about the Disney experience, the camaraderie of fellow Star Wars fans & of course, the costumes! There were SO many cool ones but it was hard for me to take photos of them. I did get this cute father – daughter duo though. The girl was Wicket the Ewok & her dad was George Lucas with a megaphone…and “Action!” 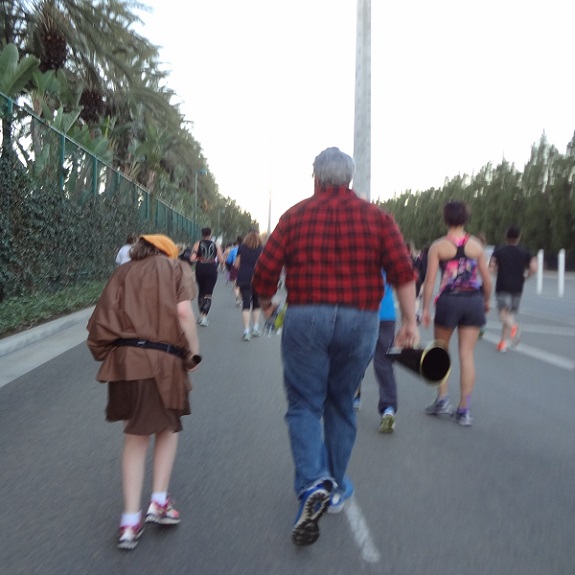 Speaking of costumes, check out this Buzzfeed article that captures some great Star Wars race outfits! My fellow blogger buddy Mindy had her photo quoted (is it quoted or captured?) in Buzzfeed. Scroll down to #29 where you’ll see a much better pic of “George Lucas” with his megaphone in action.

I was so happy to meet my daughter & hubby for breakfast right after the race.

You may ask, why do I run these runDisney races? I run it for the bling of course AND the Dole Whip treat afterwards!! 🙂

Tell me, have you ever participated in a runDisney race? If you could (and money was no object), which one would you run in?

Disclosure: No monetary compensation was received for this post. All images & opinions ar 100% my own.