Two weekends ago I participated in a 10k at Disneyland. It was special for several reasons: it was a runDisney event, it was my very first 10k ever AND it was my birthday weekend. Initially I had wanted to run the Disneyland 10k in 2013 to commemorate my 40th birthday, but by the time I went to register, it was too late & it had sold out. In a way it was a good thing because this year’s 10k race theme happened to be Lilo & Stitch! 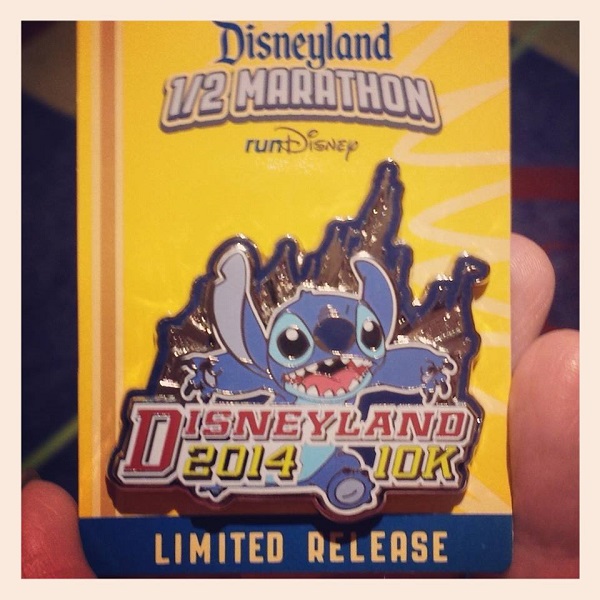 My parents are Filipino, born & raised in Hawaii (mom on Oahu & dad on Kauai). Although I was born in California, we went back to visit family at least every two years.

When I worked at Disney (many years ago), the movie Lilo & Stitch was getting ready to be released. I fell in love with the movie, especially the characters & of course the theme of ohana, which means family. You see, most little girls I knew growing up wanted to be a princess like Cinderella or Sleeping Beauty’s Princess Aurora. I knew that I didn’t look like those girls. So when Lilo & Stitch came out, even though I wasn’t a young girl anymore, I thought to myself “YES, finally a movie that reflects a culture that I love & that represents more of me than any other Disney movie!”

So…enough reminiscing & back to the runDisney race. I knew that I would wear a Hawaiian themed outfit. This is what I used as inspiration for my race costume… 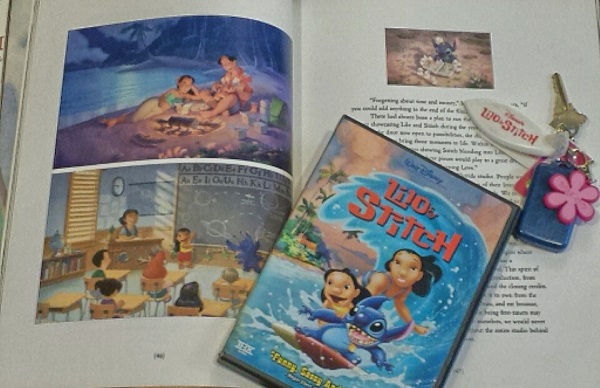 (That Lilo & Stitch surfboard keychain in the upper-right corner is my fave film souvenir from DCP.)

My daughter said that I was too old to be Lilo (ok, fine), so instead, let’s just say that I represented her older sister Nani. Fun fact: My birthday is the same day as Queen Liliuokalani (she was the last monarch and only queen of Hawaii). I like to think that Lilo could be a descendant of Queen Liliuokalani, so in my mind Lilo is a Disney Hawaiian Princess. 😉

I went to a party store & bought various Hawaiian accessories. This is what I ended up using. 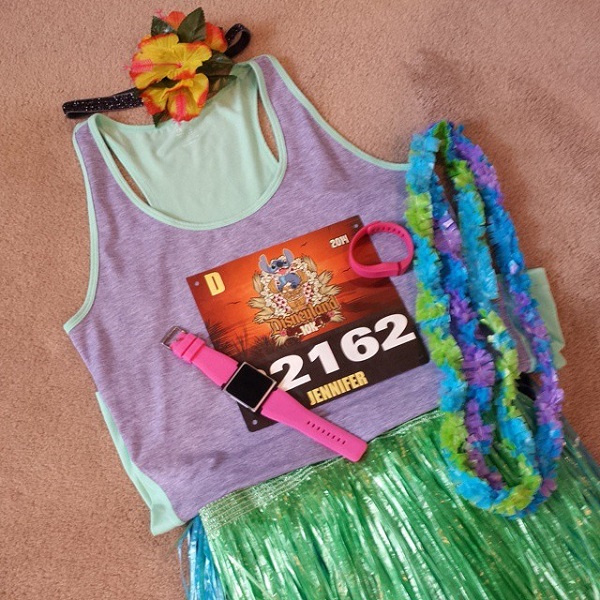 A couple days prior to the Disneyland 10k, I headed out to the Disneyland Hotel Convention Center & toured the runDisney Health Expo. I had seen a lot of the vendors earlier this year from when I participated in the Never Land 5k. So I skipped most of the booths & made a beeline for the Event Merchandise area. I was a tad disappointed that they didn’t have a special “I Did It” t-shirt for the 10k race (other than the race shirt that you got with your bib). After I left the merch area, I headed over to the photo sections & also checked out the 10k medal.

I woke up at 4am on Race Day to get ready & catch the shuttle to Disneyland. While walking over to the corral, I stopped to take a photo of the 10k finish line. 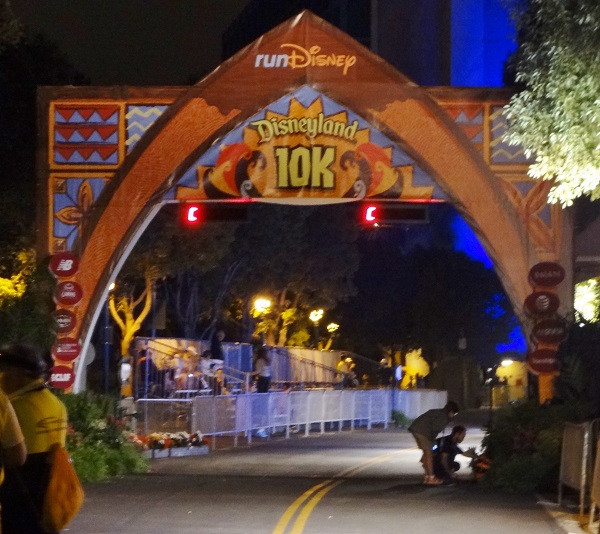 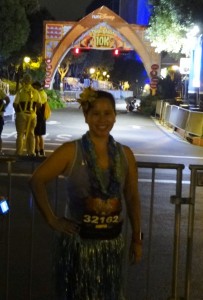 I made my way over to Corral D (I’m not that fast of a runner), which was right around Magic Way & Disneyland Drive. 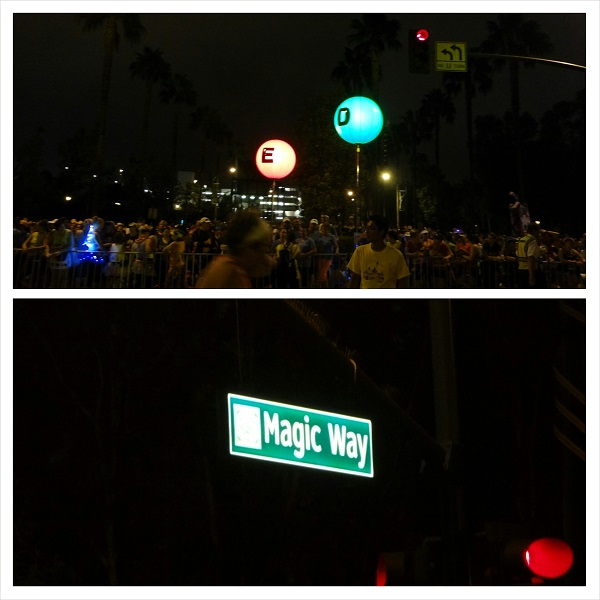 The race started at 5:30am, but I had to wait for all the other corrals ahead of me to start before mine. Here’s a shot of the starting area from my corral. I read online that 10,000 people registered for this race – crazy!! 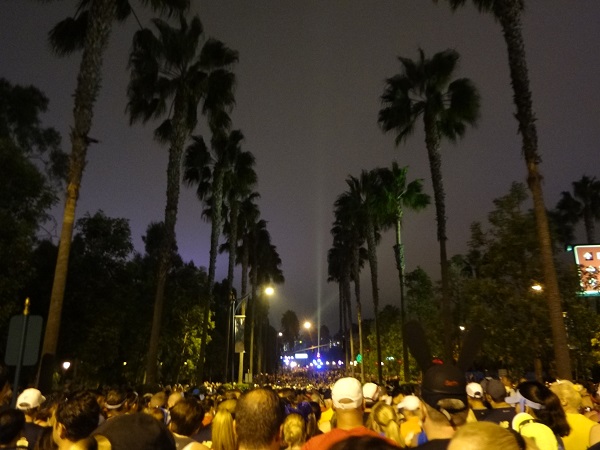 Finally we were off! My plan was to stop for photos around Mile 3. The first 3 miles of the course are along the streets of Anaheim. So my plan was to jog at a steady pace down Disneyland Drive, Harbor Blvd, etc. Then once I got to the parks around Mile 3, then I’d stop for pics.

Here’s a pic of me at Paradise Pier with Mickey’s Fun Wheel in the background. Tons of people stop at this area to take selfies. It’s a popular backdrop. I asked a fellow runner to take a pic with my camera & just prayed that my face wasn’t too red from running. If you follow me on social media, you’ll notice that I call myself #TeamTomatoFace (my fellow fitness friend Melissa understands my plight). 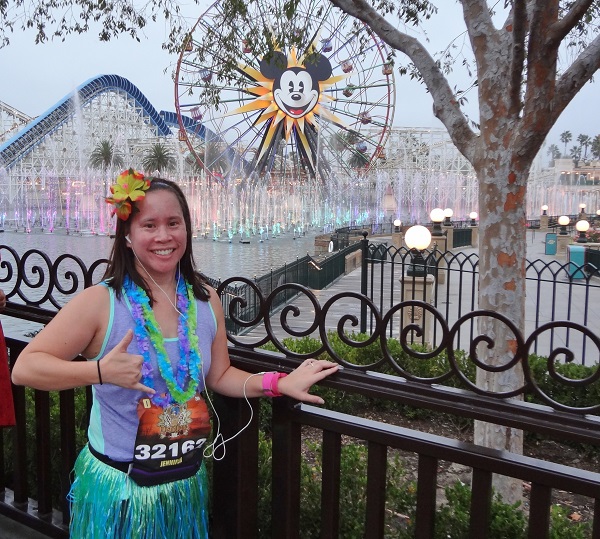 I really loved the Mile 4 marker, so I stood in a relatively short line to snap this pic. 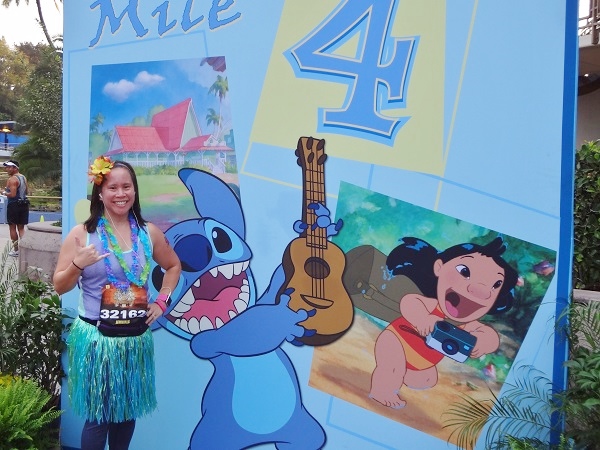 Even though this wasn’t a mile marker, I handed off my camera to an employee & asked him to snap a photo of me in front of the Disneyland parade float. 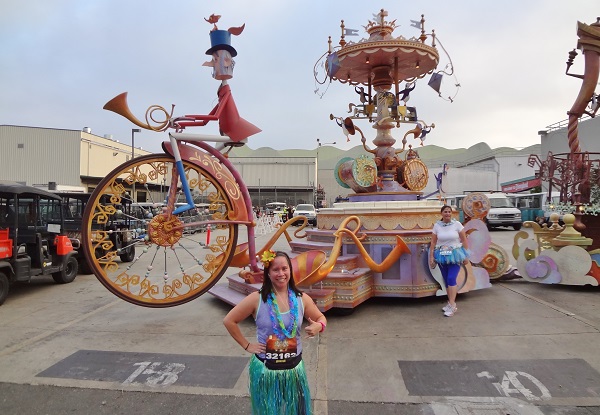 Mile 5 was my favorite mile marker!! 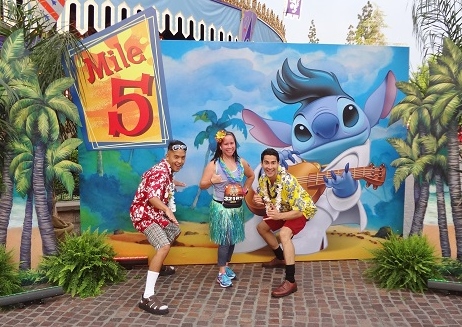 Did I mention that I didn’t train very well for the race? I had worked out at various fitness studios & of course my local Y over the summer. But I didn’t train for running the 10k event in the way that I probably should have. So although I kept a steady pace throughout most of the race, by Mile 5 I was definitely taking advantage of snapping some pics – like this one in front of Sleeping Beauty’s Castle. 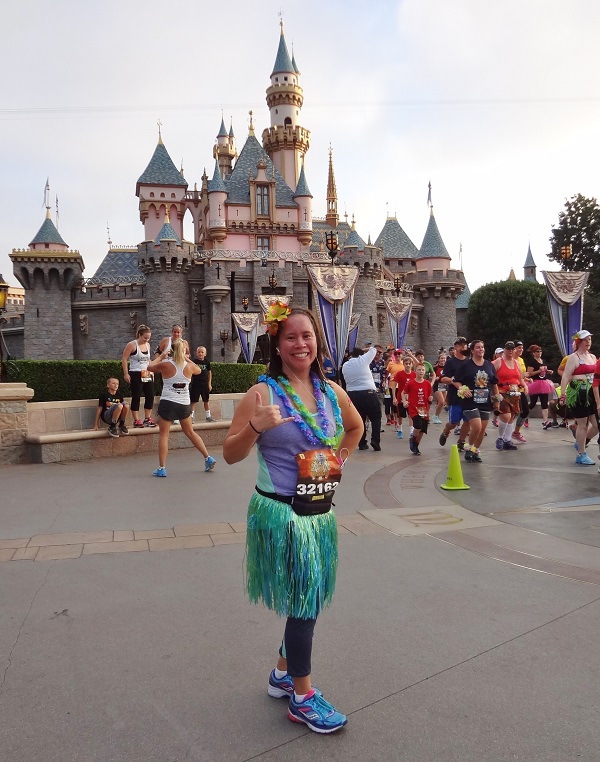 Here’s my kiddo’s favorite boat ride, Sailing Ship Columbia. I didn’t really need this pic but felt compelled to take it when I needed a break before that final push. Lol… 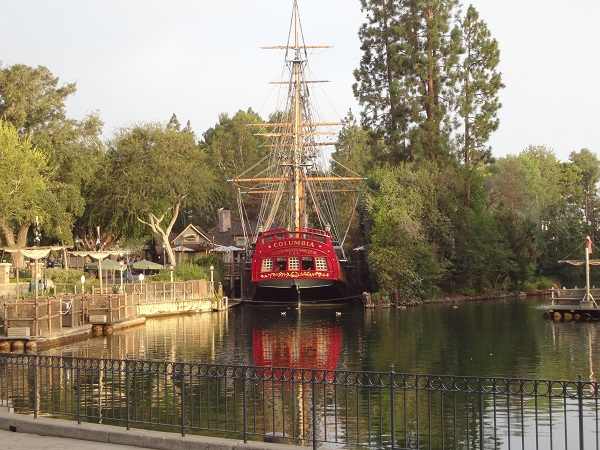 At that point, after I snapped the photo of Columbia, I decided to kick it into high gear. I had made a special playlist on my iPod for the Disneyland 10k, but the one song that always pumps me up for running is “Stronger” by Kanye West (yeah, that guy). So I switched to the other playlist & put that song on repeat mode. Then I ran the rest of the way to the finish line.

I was SO happy when I finished the race & received my Stitch bling! I was even happier later on, when I found out that I had finished under 90 minutes (which had been my goal all along). Not bad considering I hadn’t trained that much & stopped for photos along the race route. 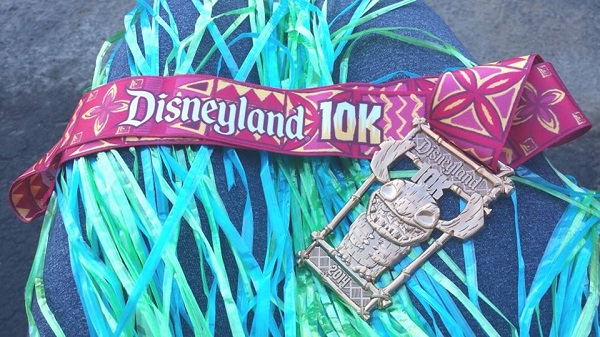 After I got my snack box, ate my banana & drank a ton of water, I watched the hula dancers who entertained the crowd near the finish line. I just love this song from Lilo & Stitch! 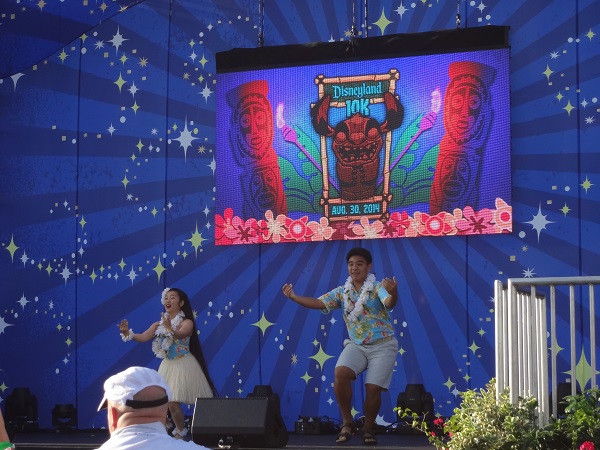 Once the entertainment was over, I jumped on stage to get a photo under the cute Stitch graphic! 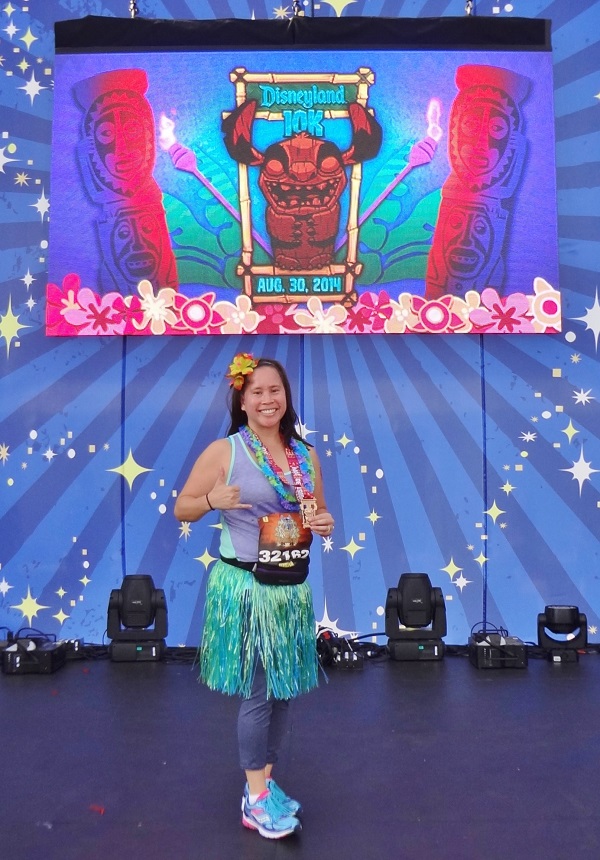 I spent the rest of that morning/afternoon, laying by the hotel pool while my hubby & kiddo went on rides at the theme parks. Spending 40 minutes in the Jacuzzi hot tub was just what my legs needed. Later on, when the parks got crowded & the lines were too long (this was Labor Day weekend after all), they joined me at the hotel for some swim time.

Later on that evening, we headed to the Disneyland Hotel to celebrate my birthday (a few days early) by having dinner at Steakhouse 55. Our hostess took this photo in the lobby area (since the dining area was too dark). I loved how the photo turned out with Walt in the picture. The hostess said that it looked like Walt was patting me on the back (maybe for a job well done on the race?). Sure I’ll take that…  😉 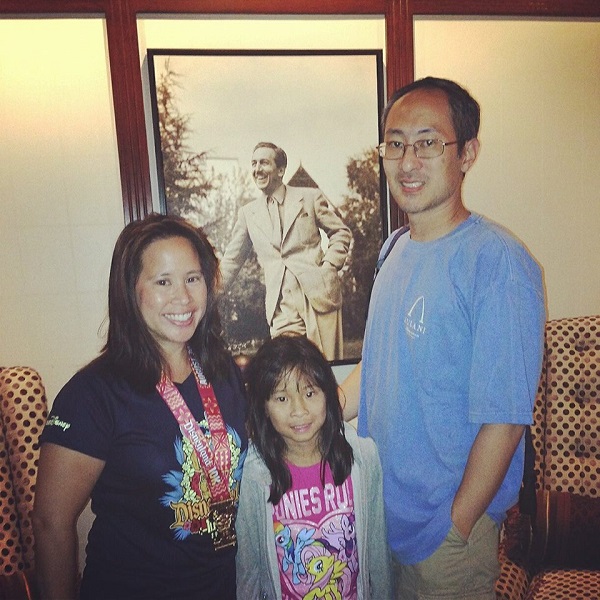 Afterwards, we went into Disneyland & watched Fantasmic. We had an excellent view & stayed put once the show was over because immediately afterwards was the Disneyland fireworks.

All in all, it was a great way to end the race day & to celebrate my birthday!