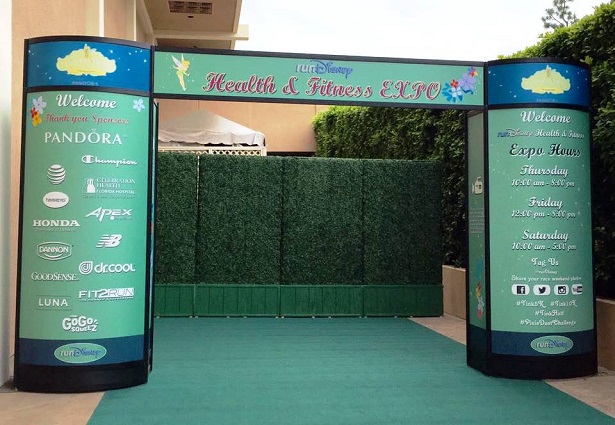 Just like in previous years, it was held at the Disneyland Hotel. As I walked from the Mickey & Friends Parking Lot, I couldn’t help but think how it was only two years ago that I ran my first runDisney race – the Never Land 5k. 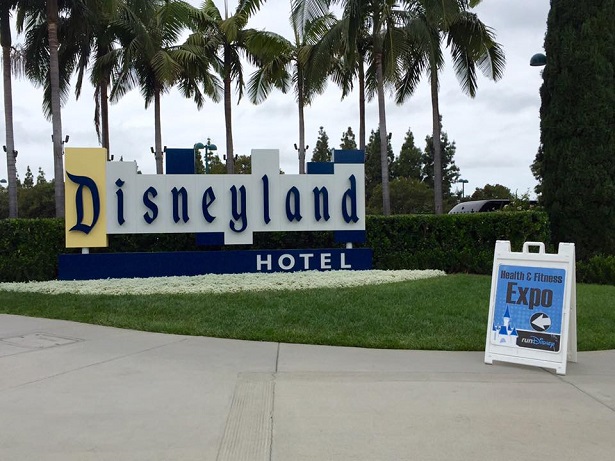 After I checked-in & picked up my bib, I headed over to the New Balance booth to check out the runDisney shoes. I was all set on buying a pair of the green Ariel shoes right then & there. I mean, how cute are these shoes?! 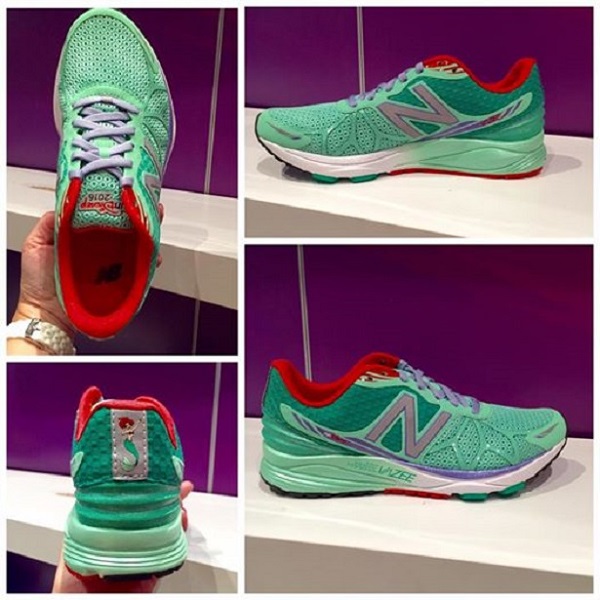 However I missed out on registering through the New Balance “Virtual Queue” (this is an online appointment set-up via the website). These runDisney shoes are so popular that they created this process so that people can buy their shoes in an orderly fashion on the first day. Soooo…I asked the salesperson & she said I could come back at 4pm when it opens to the general public.

So off I went to hit-up more booths! Being that this race was taking place during Mother’s Day weekend, I sweet talked my hubby into letting me pick out my own present while I was shopping the Expo. (Yay for motherhood & retail therapy!) I bought a running skirt & compression socks, which completed my race day outfit. 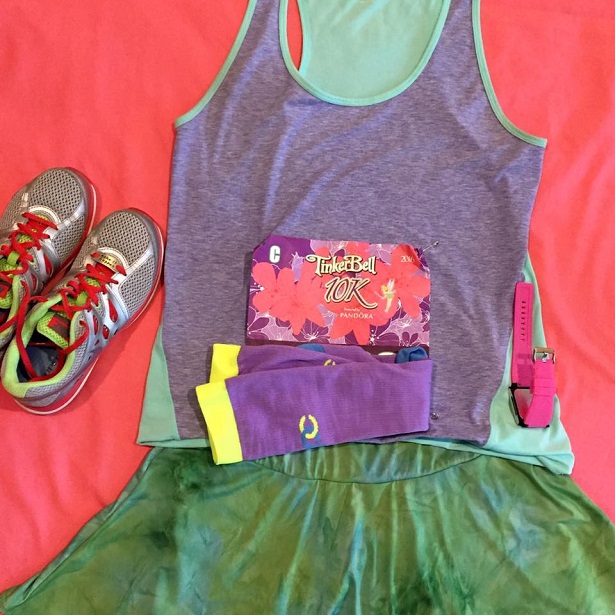 While most of the vendors are the same year after year, race after race (hello KT Tape & Pro Compression Socks!), there were a few vendors that were at the Expo targeted to women since the Tinker Bell race pulls mostly female runners. I’ve participated in the other runDisney races (Star Wars & Disneyland) & the female to male ratio tends to be 60-40. So it should come to no surprise that this race was sponsored by Pandora!

I wish I was more into bracelets because their charms are super cute. Even though I didn’t buy any product, it didn’t stop me from posing for a picture at their butterfly wall. 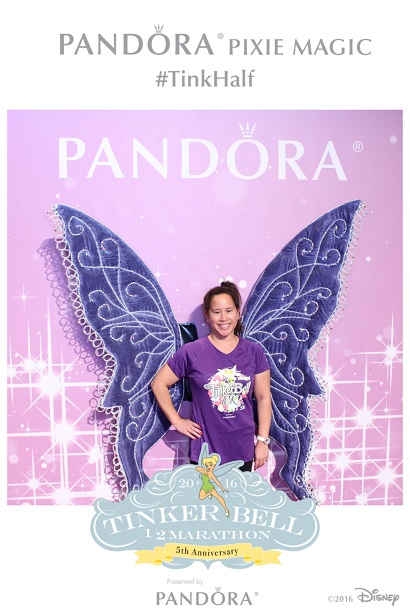 I wasn’t feeling that photo (why do I always feel compelled to put my hand on my hip?). So since I was killing time, I stood in line to take another picture in the lobby.

Finally it was time to head over to the New Balance booth & I asked for both a women’s size 5 & a Youth size 3 shoe. The salesperson thought I was nuts but I explained that I have small feet. I ended up buying a size 2 ½ shoe. The design changes of the kids shoe versus the women’s shoe are subtle. The shoelaces are a different color & there is a slight difference in the Ariel graphic on the back of the shoe. The shoe insoles in the adult version did seem cushioned differently but it didn’t matter that much to me since I would be ripping them out & using my Superfeet running insoles instead. Also the inside base of the kids shoe is purple & white whereas the adult version is pale green & white. Purple is my favorite color, so I’ll take it (AND the $40 price difference too)!! Sometimes it pays to have small feet… 😉 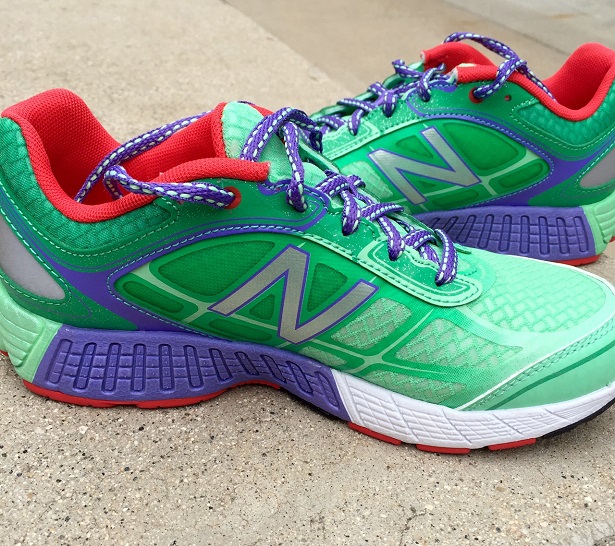 On Friday afternoon (the day before the race) it poured for two hours. So that made for a nice drive to Anaheim from the Valley. Not…

I woke up on race day feeling excited & nervous. I hadn’t run a 10k in a little over a year (Star Wars 10k being my last race) & felt slightly anxious. So to psych myself up, I snapped a pre-race shoe selfie in the lobby of my hotel.

As I walked briskly out of the hotel’s double doors, I anticipated a cloudy sky but was caught off-guard by the rain. I had checked the weather app yesterday & although there was a downpour in the Valley on Friday afternoon, the forecast for Anaheim was more along the lines of cloudy with a chance of rain (which in SoCal usually means no rain).

While I waited on the corner for the shuttle bus with the other runDisney runners, everyone chatted in disbelief that it was raining quite steadily at 4:45am. Who says it never rains in Southern California?

The shuttle bus dropped us off near Downtown Disney & as I walked with the other runners (who were commiserating about the weather & how they’ve never run in rain before), I thought to myself, don’t let this weather situation “rain on my parade.” (lol pun intended)

So I got to my corral & waited for a ½ hour until the race started.

Thankfully it stopped raining just before 5:30am & then it was time to go. But wait…Corrals A & B to go first, so I watched them get to the starting line on the jumbo-tron. 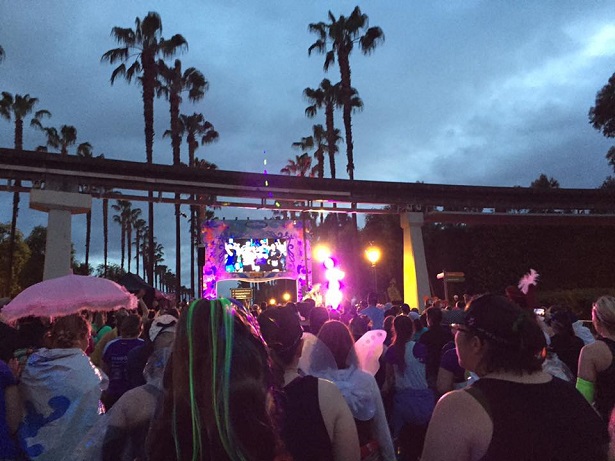 It was at that point that I made a conscious decision to try to run the whole race all the way through & not stop for pictures. I was so cold & just wanted to be done with it all. Plus I’ve been in several other runDisney races where I stopped to take photos in front of the Disney castle & posed for pics with Disney characters at various mile markers. Admittedly, I did this partly to capture the experience on film but mainly it was a way for me to rest & catch my breath. This time I was determined to run it the whole way through! Plus I wanted to see if my months of training with Orangetheory Fitness paid off.

At least there were Disney photographers to capture the moments during the run. I like how the one lady in the blue tank behind me was totally posing! Hee hee…

It was just before mile 5 when my knee started to stiffen up. It was either from the cold or because I was pushing myself & my knee issue was acting up. Why didn’t I tape it the night before with KT Tape?!! So I started to do this weird run, slow jog, hobble thing. Eventually I just shook it off when I got to a certain point in California Adventure because I knew that the Downtown Disney part of the course was near & that could only mean one thing…the finish line was within reach!! 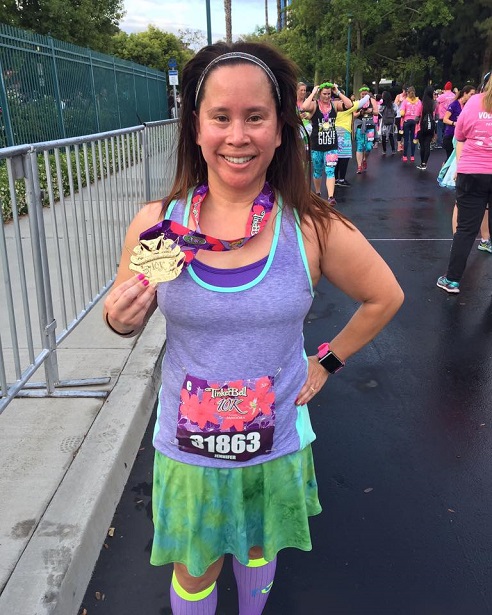 Disclosure: No monetary compensation was received for this post. All runDisney fees were paid by me. All images & opinions are 100% my own.