Last Friday I ran in my very first runDisney race – the Never Land 5k! The Never Land 5k was just one of several races taking place during Tinker Bell Half Marathon weekend. The 5k race started at 5:45am – yes that’s crazy early I know, but it was well worth it to see these fantastic views of Sleeping Beauty Castle lit up in the wee hours of the morning!

The race was kicked off by a fireworks show & a special appearance by Tinker Bell! I was so awestruck by the whole thing that I forgot to capture it on camera. However thanks to the power of YouTube & a fellow runDisney racer, here it is…

Then we were off! Running up Main Street, through Small World & then backstage.

Backstage we ran past a couple of floats from the Disneyland Holiday parade.

Eventually we headed into a tunnel & popped up near Frontierland. 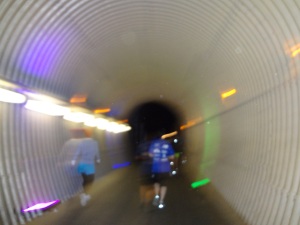 Check out the folks in the canoes cheering us on!

We ran past some neat signage. 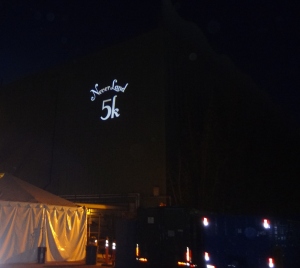 Then we entered our second tunnel of the race. I saw some cast members (i.e. park employees) standing on the platform behind the gate, clapping for the runners. 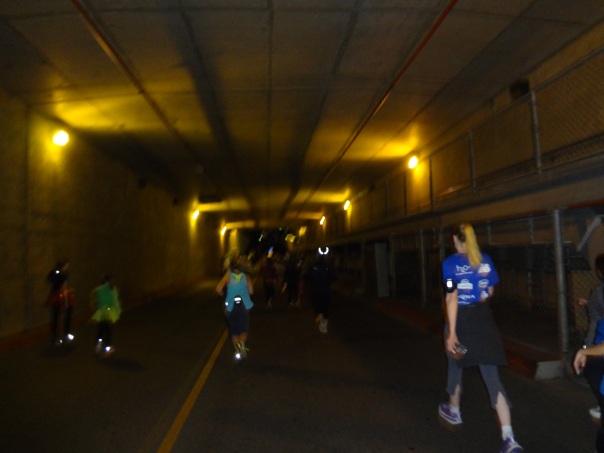 At some point we crossed over to California Adventure & ran past the Mad T Party.

My favorite part of the whole race was seeing these awesome views along Pacific Wharf & Paradise Pier!!

Just before the finish line, I took a photo with Peter Pan & Wendy. Ugh…ignore the sweaty, red face!  🙂

Then before I knew it, the race was over! I finished it in about 40 minutes. Not bad considering I stopped to take pictures. At the finish line, the volunteers give you a medal, a bottled water & a little snack pack. So I decided to eat my snack on a park bench & watch the sunrise. 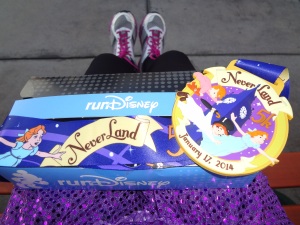 Of course I had to take a couple of pics around the park with my medal!

Participating in a runDisney race is unlike any other 5k that I’ve been in. A few things I learned:

This is probably not the race to run for a personal record. I know a lot of runners are really into getting a PR. However in my opinion, a runDisney race is all about the experience & having fun. I enjoyed getting to see backstage of Disneyland & California Adventure – running through areas that are not accessible to the general public.

Remember to “stop & smell the roses” or in this take a photo! It was so fun to take pictures of the views, with the characters & pose in front of different mile markers. I mean, when will I ever see the theme parks this empty again?!?

People love to dress up for these races! While waiting on Main Street for the race to begin, I passed by a runner dressed like the character from Brave (complete with red wig), many runners in tutus or sparkle skirts & dozens of other costumes. It was SO cool & it’s got me thinking about what I should wear for my next race.

You just never know who you’re gonna meet. I chatted with a woman (shout out to Pam!) who traveled all the way from Alaska. She was doing the 5k, while her friend was doing the half marathon on Sunday. We chatted about the unusually warm weather for SoCal in January & also she was kind enough to snap this pic of me in front of the castle before the race began.

The next day (Saturday morning), my daughter ran her very first runDisney kids dash. She was so excited to wear the lightning bolt shwings on her shoes & to earn her first medal!

All in all, it was a great TinkHalf weekend! I can’t wait to run another runDisney race! Maybe one day I’ll run a half marathon, but for now I’ve set my sights on the Disneyland 10k  later this year.

Have you done a runDisney race? What was your favorite one?