I’m a big fan of Indian food. Just give me some spicy samosas, naan bread & that delicious chicken tikka masala & I am one happy camper! I know of good places in Simi (my old hometown) & have a few go-to Indian restaurants in the Valley. However I was in for a treat when I visited Mint Leaf Indian Cuisine in the “other” Valley – San Gabriel Valley or Pasadena to be more specific.

It only took about 20 minutes to get there from my home. I spend a lot of time in Pasadena since I have friends that live there. I’m familiar with certain neighborhoods in the ‘dena (which I like to call it but I don’t think anyone really does). Mint Leaf Indian Cuisine is located on East Washington Drive in a nondescript building. It truly feels tucked away & is hidden from the main drag. 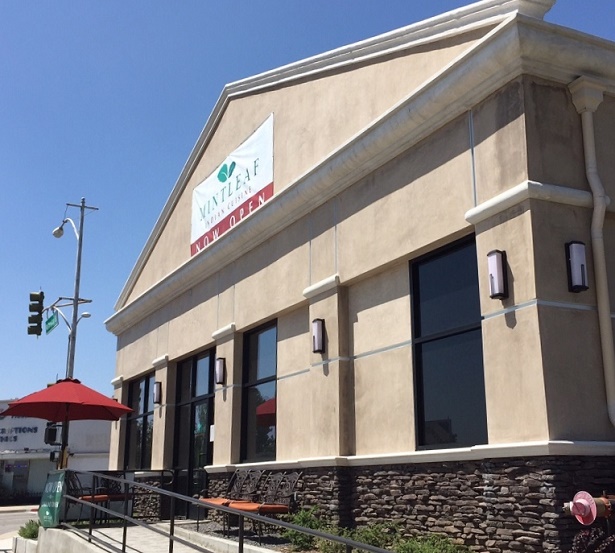 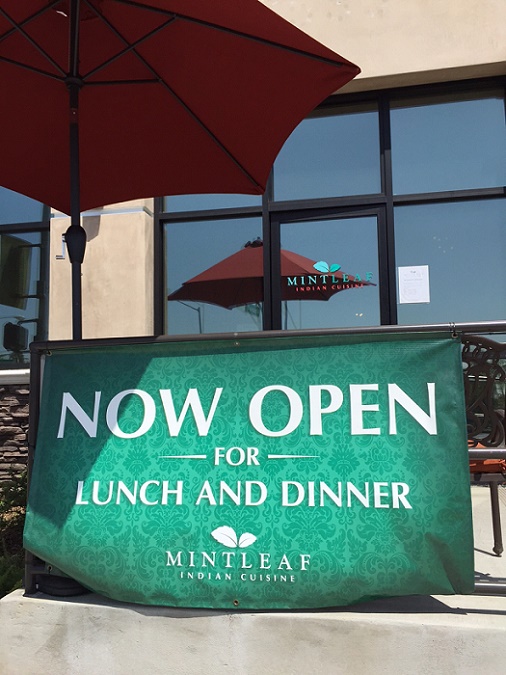 Once you enter through the doors, you step into a very opulent-looking, swanky place. We were seated & our hostess recommended that I try the Mango Lassi. It is sweet & made with real fresh mangos. The thick consistency reminded me of a mango smoothie.

Our appetizers were naan (of course) & my beloved vegetable samosas. Our hostess convinced me to try the Bhel Puri which is an Indian dish that consists of puffed rice, peanuts, shredded cabbage, tossed with mint & tamarind chutneys. The naan was delicious because rather than get my good old standby of garlic naan, we opted to get the Feta Cheese & Olive Naan. You can see the bits of olives on top of the naan in the photo & the feta cheese is stuffed right into the naan. The Bhel Puri had a crackle-crunch to it & was tasty. The samosas were yummy as we dipped them into the cilantro & jalapeno chutney (green dipping sauce) and also the tamarind chutney (dark one). 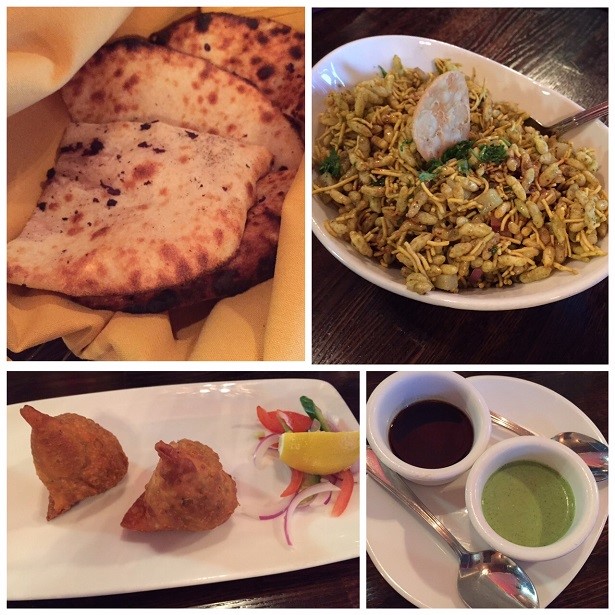 Then the entrees came out. We had a Vegetable Biryani, which is a basmati rice with veggies; Goan Shrimp Curry (hubby’s favorite part of the meal); Saag Paneer, which is Paneer cheese mixed with spinach & lastly, Chicken Tikka Masala.

I was in heaven! I was also feeling very full because everything was so good & we just ate so much.

We couldn’t leave without trying some Indian desserts. The nice thing about Indian desserts is that they are not overly sweet since they usually contain fruits & nuts, instead of the usual chocolate & sugar. First we sampled the Fig & Almond Kulfi, which is an almond-based Indian ice cream. That was my favorite dessert. The Carrot Halwa is a carrot pudding with pistachio crumbles, raisins & cardamom. It was pretty good. My husband’s fave is the Gulab Jamun, which are dumplings tossed in a rose-flavored sugar glaze. The little dumpling kind of reminded me of a donut ball. The sugar glaze was very sweet to me, hence that’s why hubby liked it so much. He’s got a sweet tooth!

I would definitely recommend giving Mint Leaf Indian Cuisine a try. If I lived in Pasadena, it would probably be my go-to Indian place. So the next time I meet my friends for lunch in Pasadena, you know where we will be heading! 😉

Disclosure: No monetary compensation was received for this post. I received a complimentary meal which helped facilitate this review. All images & opinions are 100% my own.