If you’re a fan of Modern Family, then chances are you’ve watched the flash mob episode which featured Mitchell & Cameron dancing to an En Vogue song. Staci Lawrence, owner of Flash Mob America, is responsible for the flash mob in that episode. Fun fact: Staci was 7 months pregnant at the time of the taping of that episode – what a trooper for producing that dance number on location!

Staci is based in Burbank but her company does productions all over the country. In addition to choreographing flash mobs for the entertainment industry, Flash Mob America has also produced & performed for birthdays, company parties & marriage proposals. 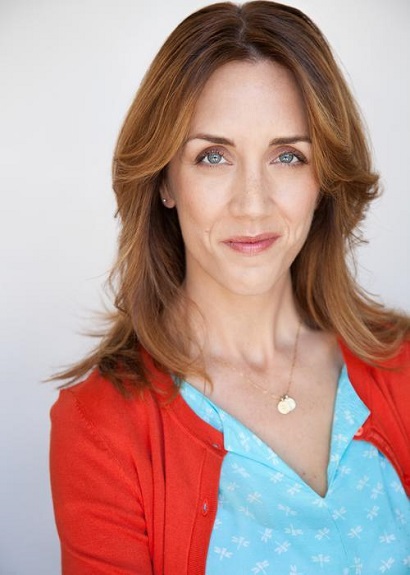 How/why did you begin your business?
Staci: In 2009 I attended the public memorial for Michael Jackson. A friend from acting class, Conroe Brooks, also happened to be there so we went out to lunch after, sharing childhood MJ stories and YouTube videos. After seeing a “Beat It’ flash mob in Sweden, we decided to recreate it here in the states. It turned out to be the first public American MJ tribute. We repeated our performance a month later on what would have been his 51st birthday. It got so much attention that Janet Jackson’s record label hired us to produce three flash mobs for her Number Ones album AND she showed up! Once that hit the news that night, it felt like we were instantly “internet famous” and found ourselves being followed (and hired) by some of the world’s largest PR firms and ad agencies.

We never set out to create the world’s first flash mob production company, but we had to meet the demand. For the first six years we didn’t take a single day off, even holding production meetings in the hospital two days after my first c-section. We have since produced over 400 flash mobs around the globe, from Chicago to Singapore!

So that’s why we started, but why I keep going is that flash mobs create a unique family of people from all walks of life, all over the world, who have a passion for coming together and creating joy for people. They dance to give back to their community, exercise, check off a bucket list dream, meet new people, or even fulfill that little performance bug. It’s been a great surprise to me and very rewarding.

What is one tip or piece of advice that you would give to other female entrepreneurs?
Staci: As far as female-specific advice, I think assuming I am being heard, respected, and “invited to the table” has served me well. I don’t ask for permission. I take my seat and share my thoughts, which in my business means taking the lead, taking the mic, and encouraging people to be their best self.

Being an entrepreneur and a mom are two hats that don’t really ever come off, so I’ve learned that I need to trust that I am wearing the right hat at the right time. Self-doubt can be debilitating, whether you have kids or not. The only way to be present with your loved ones, and present for your business, is to be where you are in the moment. (Thank you Eckhart Tolle!) Family and friends require love and time, but they don’t require 100% of you all the time. My biggest struggle has been allowing myself to be fully immersed in my work when my kids are occupied, and then turning off my work brain when I’m spending time with my family or friends. Trying to stay in both worlds all the time tends to cause anxiety and resentment for me, and it can block me from being productive and grateful. I feel more joy when I’m fully present and in the flow.

Also, and this is so simple, but it has helped me tremendously – I don’t carry my phone around. There are very few times in life that holding your phone or having it in your pocket, is required for happiness or success.

What do you like best about having a business in the San Fernando Valley?
Staci: My favorite thing about living and working in the Valley is hiring local talent. There are so many great people here who are excellent at everything they do and are also really good people. My producers and choreographers live here with their families, as do many of our flash mobbers. I feel fortunate to be able to work with many small businesses, such as local dance studios where we rehearse and record our instructional videos. Plus, staff meetings are always fun because we get to eat at some of the Valley’s best restaurants.

If there was one thing you wish you knew before you began your business, what would that be?
Staci: I think for us we always felt like we were on a speeding train, with no way to get off. We just tried to catch everything that came our way, with many potential new clients slipping through the cracks. I would have hired a business development person or a salesperson, someone smarter than us in that area to help us grow the business with focus and purpose even as it was skyrocketing.

We always felt like we didn’t want that kind of thing because we didn’t seem to need it, but once the hype died down and things became more steady and stable, it would have been a good thing to have that [business development] experience on our team. There’s still time for that of course, and we are focusing on it now that we see that SEO, social media and content marketing are so powerful. Finding the time and energy to focus on that growth is my biggest challenge now that both my kids are starting school, dance, swimming, etc.

So what I’ve learned is that you should always hire people smarter and more experienced than you and if you find yourself thinking “we’ve never needed to advertise” – you still should.

I appreciate Staci sharing her insights on what it’s like to run a small business. What an amazing job she has to create happiness & spread joy to others through movement & dance! It’s no easy task to balance work & family, especially when facing a tight production deadline. Her struggle to be present & stay in the moment is a common one among many women. I’m sure we can all recognize the “push/pull’ that she describes.

Staci’s company creates a unique & memorable experience for people all over. One of my favorite Flash Mob America videos is of a marriage proposal set in Washington, D.C. that features songs by Bruno Mars & Peter Gabriel. That moment towards the end with the boombox…priceless!

For more information on Flash Mob America, visit the website here. Also don’t forget to check out their Facebook page so that you can get the latest updates!

Disclosure: No monetary compensation was received for this post. The image shown in this post is used with permission. As always, my opinions are 100% my own.