Two Bit Circus is coming to town! Have you heard of Two Bit Circus? If not, get ready to hear a lot more about this company & foundation in the coming weeks! 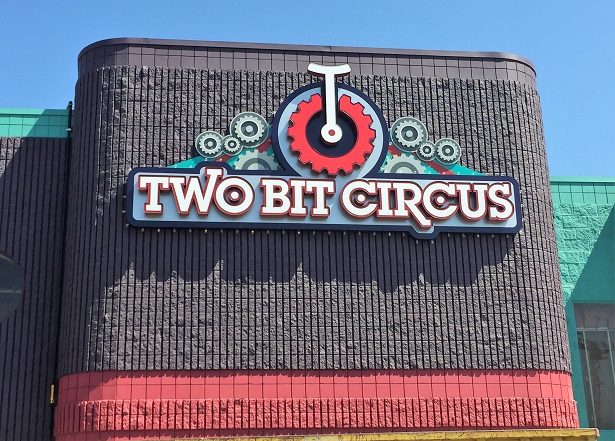 Billed as a Micro-Amusement Park™, Two Bit Circus combines a lot of familiar elements that one might see at a John’s Incredible Pizza or Dave & Buster’s. At Two Bit Circus, there are video arcade games, food & drinks, lounge areas & much more. The key difference is that Two Bit Circus has elevated the game playing & kicked it up a notch (or ten) with VR technology that is next level! 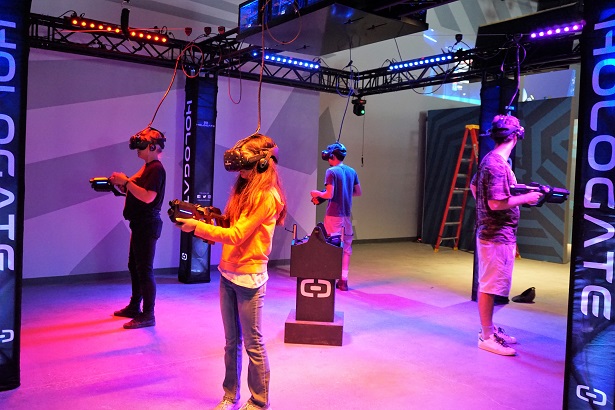 My gamer girl playing a snowball game on HOLOGATE.

You may not be familiar with Two Bit Circus but if you’re a gamer, then chances are you’ve experienced their technology. Brent Bushnell (CEO of Two Bit Circus) has a tech background & previously worked at a company that built large-scale VR attractions for San Diego’s Comic-Con, the NFL, Google & Disney. 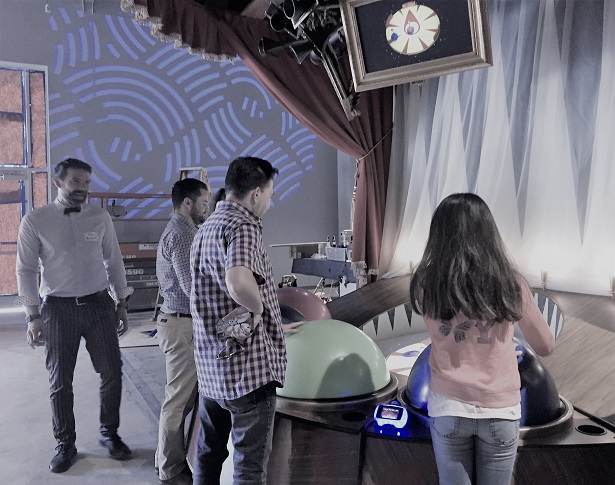 Brent realized that while thousands of people may have enjoyed these games & experiences, once that event was over, these proprietary attractions were torn down or stored away in a warehouse. Longing to have a permanent place to house all of this technology, Brent & Eric Gradman (CTO & co-founder of Two Bit Circus) decided to find a location where the enjoyment could be experienced by many people for years to come. 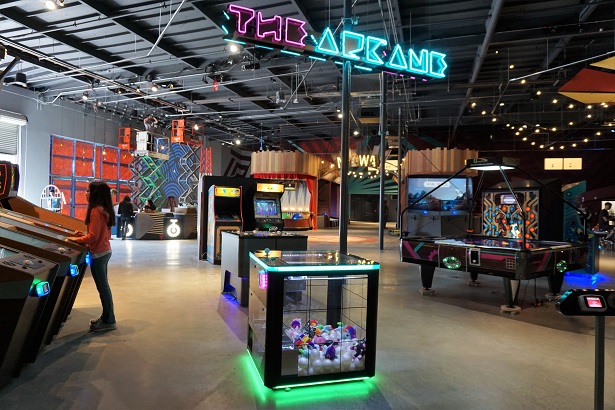 The team decided on downtown LA. It was important for the company to choose a location that was accessible to greater Los Angeles, from the Westside, San Gabriel Valley, Long Beach & even Orange County. It’s close to Union Station & just a stone’s throw from the DTLA Arts District. Yes, I realize that the San Fernando Valley is somewhat far but once you see all that Two Bit Circus has to offer, then you’ll see it is worth the drive!

First off, this isn’t your mama’s video arcade! Heck, it’s probably not even your daddy’s gaming arcade either. 😉

Arcane Arcade
Check out old school games. I was thrilled to show my preteen daughter the Pac-Man game that I loved as a kid! 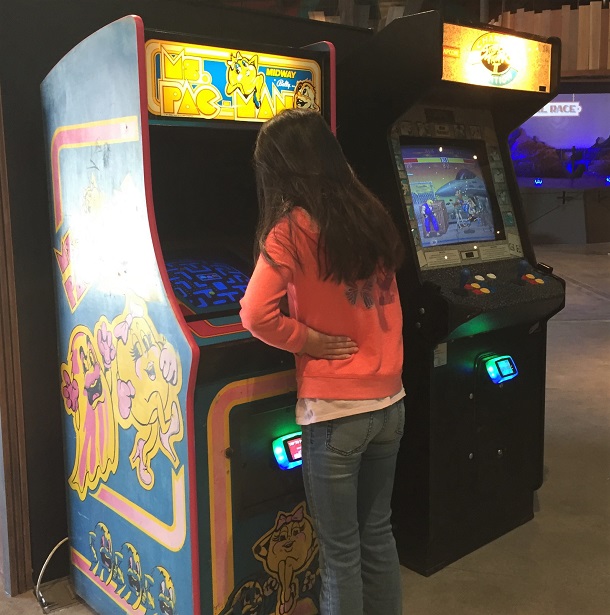 But there is so much more, like this dancing game, which Eric Gradman demonstrated for us.

She was also obsessed with this Wiffle Waffle game & I basically had to pry her away from it.

The Midway
It’s like those boardwalk games but with a high-tech twist. 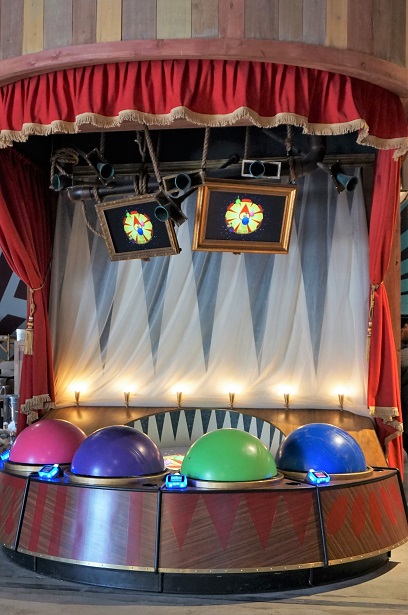 Our favorite game at the Midway was the Demolition Zone. After we watched the demo, we jumped on it & played 2-3 times!

The Raft (VR)
Is a multiplayer VR experience. You & your friends will board The Raft & defend the swamp against an infestation of supernatural creeps. This experience wasn’t available for us to try during the media preview but it sounds awesome!

The Arena
This is where you’ll find HOLOGATE, VR Stations & Battlezone. I was hesitant to let her play HOLOGATE but when I heard there was a family-friendly snowball game, then I said “Go for it!” Four people at a time can play – either against each other or team up against the “enemy.”

At that point, my kiddo turned into a gamer girl. She also tried out Battlezone which looks crazy! 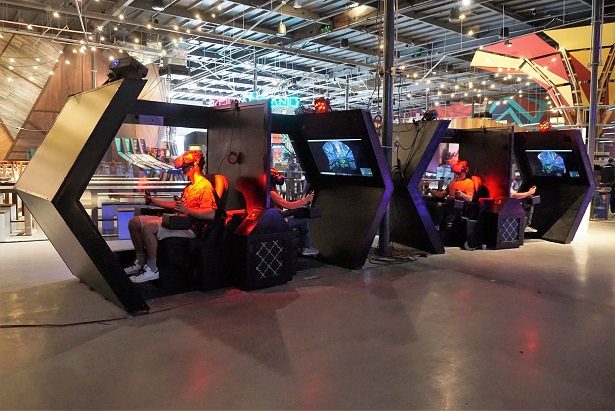 The cool thing about Battlezone is that not only do you wear VR googles but the chair you are sitting on shakes & the joystick vibrates during key moments of the game! Four people total can play the game.

Cabanas
A private room where you can play the latest VR & games. Fits up to six people with lots of space & a couch. Plus you’ll get “concierge-style” service with a push of a button & someone will arrive to take your drink orders!

Story Rooms
You’ve heard of escape rooms. This is similar but Two Bit Circus also combines VR into some of their Story Rooms. It’s an immersive group adventure for 3-7 players. The themes range from a haunted bayou, a mining room & a space adventure. The space adventure one reminded me of “Mission: SPACE” at Epcot because each person has a different role (captain, researcher, etc.) & the mission control room had a similar vibe.

There is also a Roustabout Lounge upstairs where you can chill, a “robot bar” plus a regular circular one, Club 01 which is a combo interactive theater/game show & last but not least, the Circus Train Dining Car. 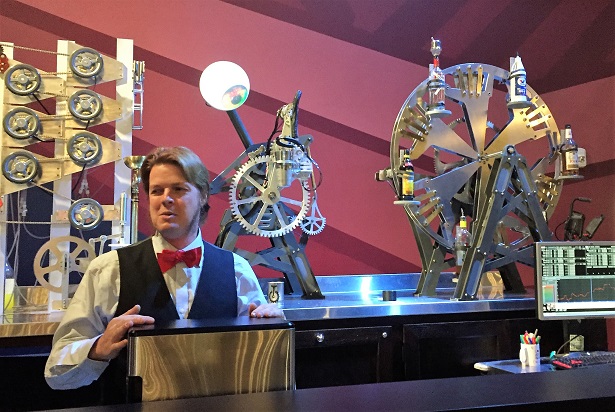 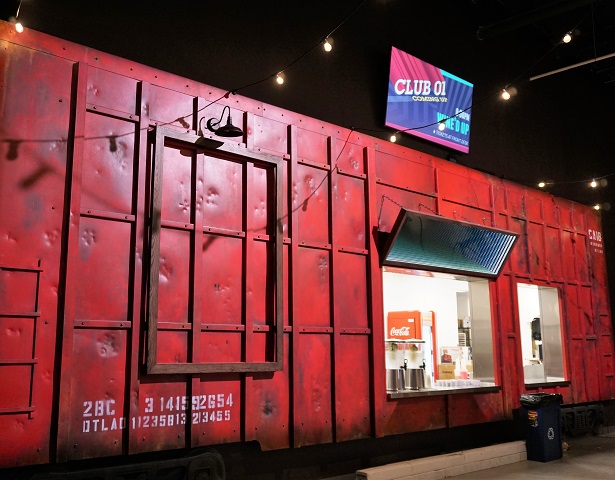 Step up to the window & order food from the dining car.

The food offered will be “farm to circus” because the food will be locally sourced, slightly gourmet & shareable. Think elevated sliders like beef & Fiscalini cheddar, Thai shrimp corn dogs, fire roasted chipotle potato tots that are baked NOT fried.

Two Bit Circus sounds awesome, right?! The Micro-Amusement Park™ will open to the public on September 7th at 4pm. Take note that after 9pm, admission is limited to the 21+ crowd. After the grand opening, I plan on visiting with my family on the weekends, when it opens at 10am on both Saturday & Sunday.

There is a special “Sneak Peek” event taking place next week. On August 27-30th between 4-11pm, you can check out Two Bit Circus before the grand opening. Plus there’s a deal on the playing cards where you can purchase $50 worth of play for only $25! The number of playing cards are limited, so hurry if you want to visit. Additional details can be found here: https://twobitcircus.centeredgeonline.com/movie/movies.

**Parking: There is limited parking in the lot connected to Two Bit Circus. There are two nearby public parking structures. The proximity to Union Station makes it easy to take the Metro Rail. Another option is to take an Uber or Lyft, which interestingly enough the LA Lyft Hub is around the corner.**

Disclosure: No monetary compensation was received for this post. I attended an event as a member of the media. All images & opinions are 100% my own.