If you’re a parent, then you certainly know the answer to this age-old question – who lives in a pineapple under the sea? SpongeBob SquarePants! 😉 Well get ready folks because SpongeBob, Sandy, Patrick, Squidward, Mr. Krabs & Plankton are back in the DVD release of “SpongeBob SquarePants: The Complete Ninth Season.” 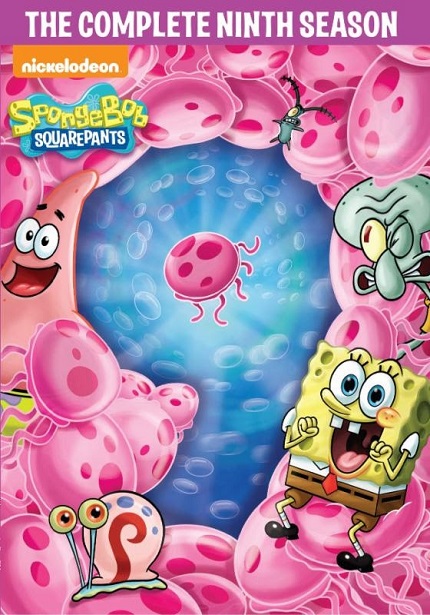 This compilation includes over 20 episodes & three double-length episodes from the show’s ninth season. It comes with four discs & over nine hours of content, including five special SpongeBob SquarePants shorts. That’s a lot of SpongeBob viewing time for your littles to watch!

SpongeBob SquarePants continues to be the most-watched animated series for the past 15 years and in this DVD, SpongeBob, Sandy, Patrick, Squidward, Mr. Krabs and Plankton are up to even more of their wet-and-wild, deep-sea dilemmas! Whether it’s SpongeBob searching for a job, Squidward learning the art of kah-rah-tay or Mr. Krabs getting married (to a pile of cold-hard-cash!), the nautical nonsense is as rampant as ever!

In addition to the four discs that contain all of the SpongeBob episodes of the ninth season, you’ll get five special content shorts:

The “SpongeBob SquarePants: The Complete Ninth Season” DVD will be available on October 10, for the suggested retail price of $22.99.

In honor of the DVD’s release, I’m hosting a giveaway contest! How would you like to win a copy of the “SpongeBob SquarePants: The Complete Ninth Season” DVD?

One Real Mom of SFV reader will win it! Please enter below for a chance to win.

So tell me, who is your favorite SpongeBob SquarePants character? Is it SpongeBob, Sandy, Patrick, Squidward, Mr. Krabs or Plankton?