I received a complimentary copy of “Ant-Man and The Wasp” as well as promotional items which helped facilitate this blog post. All opinions are my own.

Imagine my daughter’s surprise when we recently received a package in the mail from Walt Disney Studios. We were thrilled to find the Ant-Man and the Wasp Blu-ray inside, along with some other fun items!

Since it was a school night, I promised her that we could have a family viewing party on Saturday night. Movie nights are always super fun! We like to get cozy on the couch with our bowls of popcorn.

Having an “Ant-Size Night In” family viewing party!

For those who are not familiar with Ant-Man and the Wasp, here’s a refresher.

From the Marvel Cinematic Universe comes ANT-MAN AND THE WASP, a new chapter featuring heroes with the astonishing ability to shrink. In the aftermath of CAPTAIN AMERICA: CIVIL WAR, Scott Lang grapples with the consequences of his choices as both a Super Hero and a father. As he struggles to rebalance his home life with his responsibilities as Ant-Man, he’s confronted by Hope van Dyne and Dr. Hank Pym with an urgent new mission. Scott must once again put on the suit and learn to fight alongside the Wasp as the team works together to uncover secrets from the past.

Ant-Man and the Wasp is action-packed with lots of humor! I love the chemistry between the two leads, Paul Rudd & Evangeline Lilly. 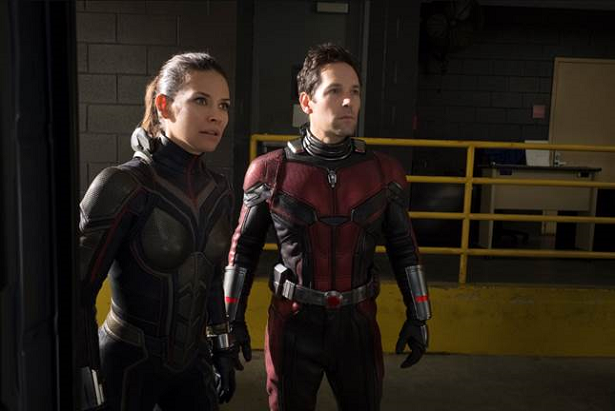 My daughter “marveled” at how the characters would shrink and/or get bigger. Speaking of that, there is a funny scene involving a PEZ Candy Dispenser!

Aside from the movie itself, the Ant-Man and The Wasp Blu-ray contains bonus footage which includes: