Earlier this month, Gus’s Barbecue opened a new location in the San Fernando Valley. Up until now, I had not been familiar with Gus’s Barbecue, but I quickly learned that the original South Pasadena restaurant has a big following!

Since 1946, Gus’s has been serving up traditional Southern cooking and finger-licking BBQ. The restaurant is in a new shopping center called The Vineyards at Porter Ranch, located between Whole Foods and a Nordstrom Rack. 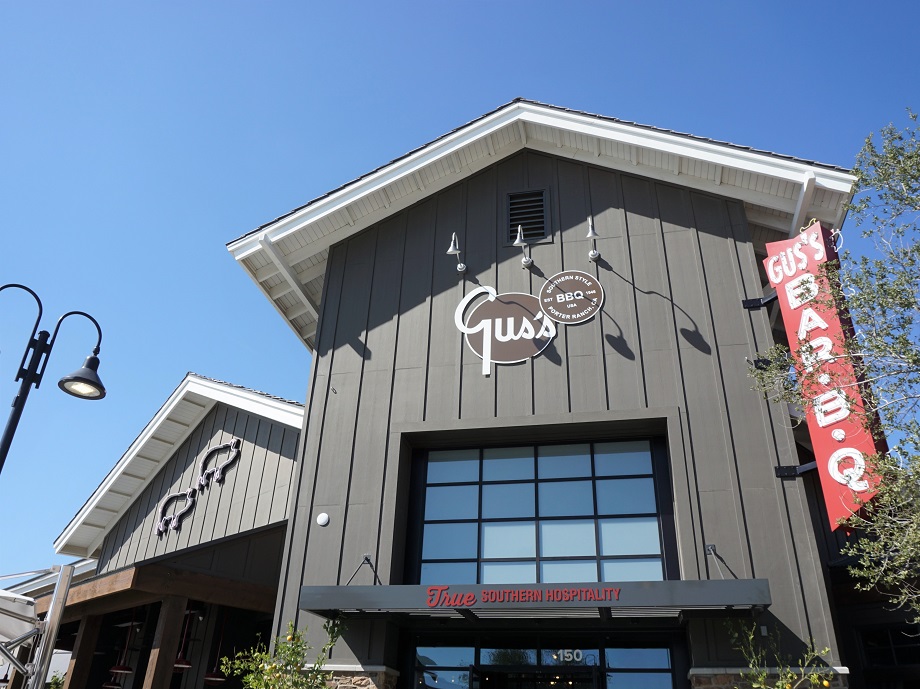 My family and I recently had lunch at Gus’s on a nice, sunny day. We had just finished hiking in the hills, so we were famished! After perusing the menu, I quickly suggested that we start off with an appetizer of Pulled Pork Nachos. Once the order was in, we studied the menu for our lunch entrees. 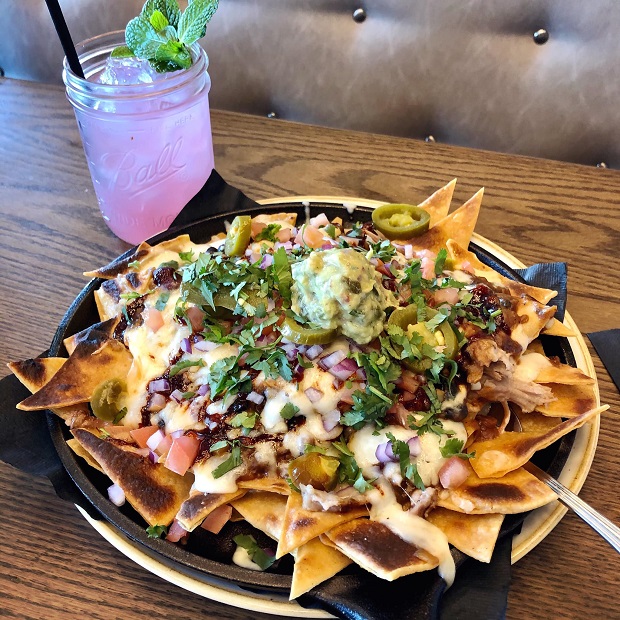 I ordered the Fried Chicken Sandwich. Now they offer it “Nashville Hot” which is a red sauce that is just like the name…hot! I was on the fence of getting it and the waitress suggested that I get the Nashville Hot on the side, that way I can dip my sandwich into the bowl and manage the heat that way. I’m glad I listened to her. Although I do love spicy food and basically put Sriracha on everything, the Nashville Hot is packed with a lot of heat. 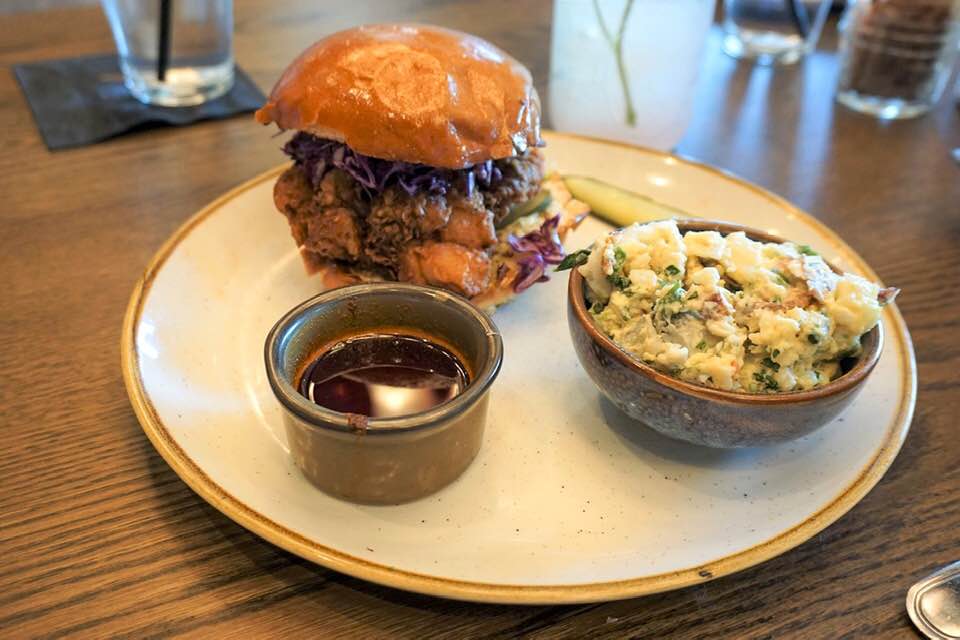 The sandwich by itself is really yummy. I had ordered it with a side of Red Skin Potato Salad. The crispy fried chicken was still moist, not dry like some other places. I took several pieces of my sandwich and dipped it into the Nashville Hot. It was good but like I said, after a while, I just enjoyed the sandwich by itself. 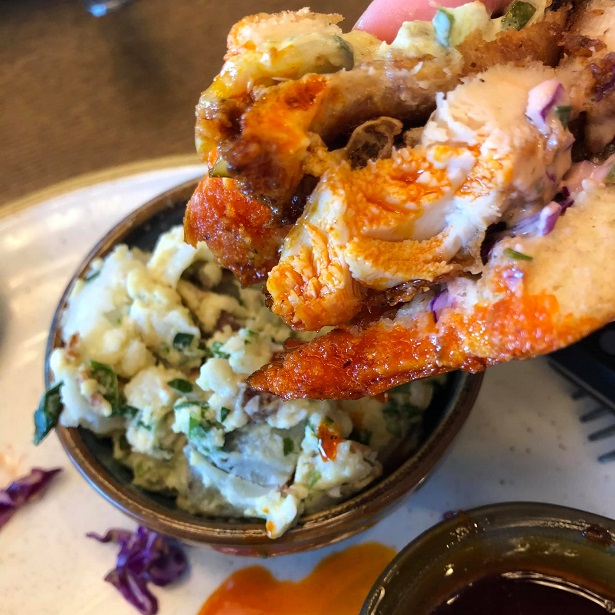 My daughter opted for Gus’s Famous Burger with a side of French Fries. She let me take a bite of it and I really liked it! It has crispy, shredded onion strings, cheddar cheese, bacon, BBQ sauce, and garlic aioli. To me, the garlic aioli creates an added layer of flavor, but if you don’t like garlic, then you might want to tell your server to skip it. My hubby also tasted the burger and he thought it was very tasty.

When you visit Gus’s, you just have to try their barbecue and they are known for “Gus’s Combos.” My husband ordered the Ribs & Two Meat Combo, which consisted of Memphis Baby Back Ribs, Texas Beef Brisket, and Smoked Sausage.

All barbecue specialties come with a choice of two sides. He ordered the Jalapeno Cheddar Grits and BBQ Baked Beans. I really like grits, so I took a healthy spoonful (or two) of that side dish. 🙂 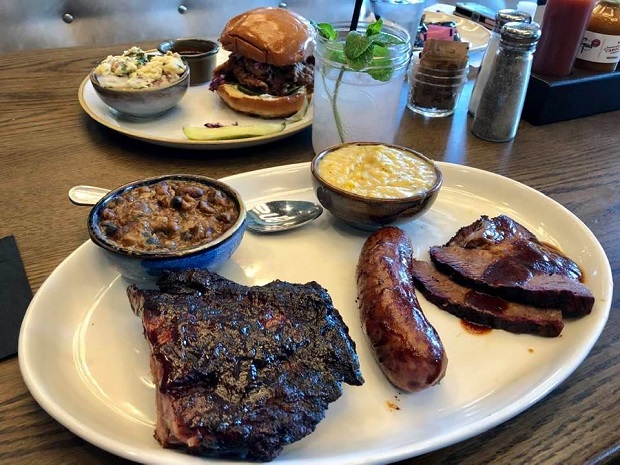 Now I sampled all three of the meats on his plate. I found them all to be delicious, but what I really liked was the brisket, as it was tender and flavorful. The sausage was good too, don’t get me wrong, and although I’m not a huge fan of ribs, but the baby backs were tasty as well.

The space has an outdoor patio in front, as well as an enclosed side room. The main dining area that we were sitting in has huge booths, lots of light, and a full-sized bar. 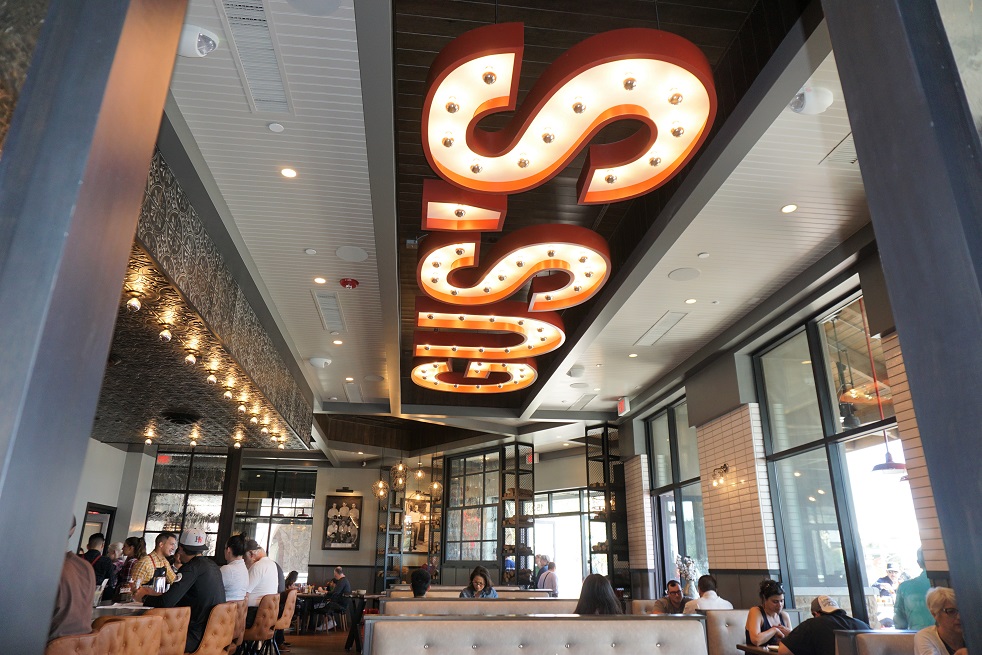 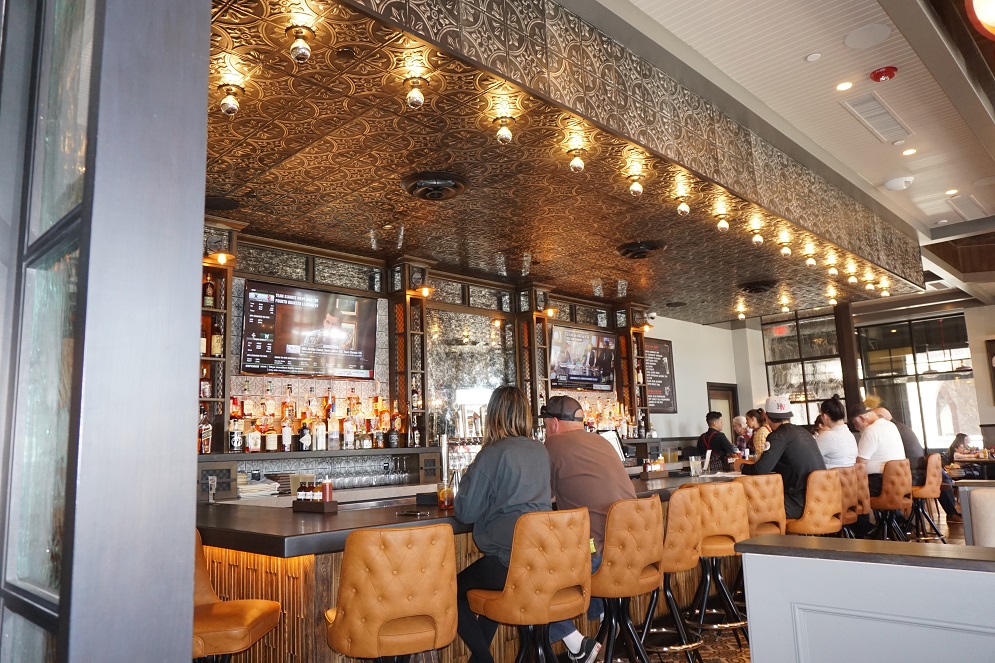 Speaking of the bar, there are plenty of specialty drinks and non-alcoholic ones to try. My family is a huge fan of lemonades, so we had the Fresh Squeezed Lemonade and also the Fresh Squeezed Blueberry Mint Lemonade. It was so refreshing! Since the restaurant does have a menu with Southern roots, it should come as no surprise that they also have sweet tea on the menu. 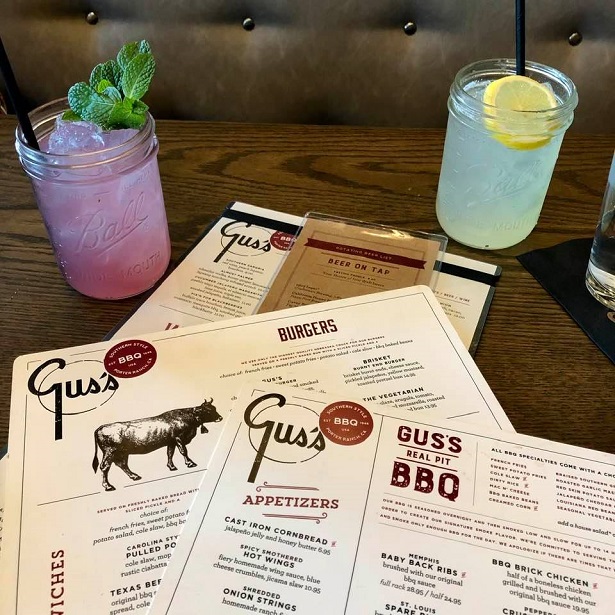 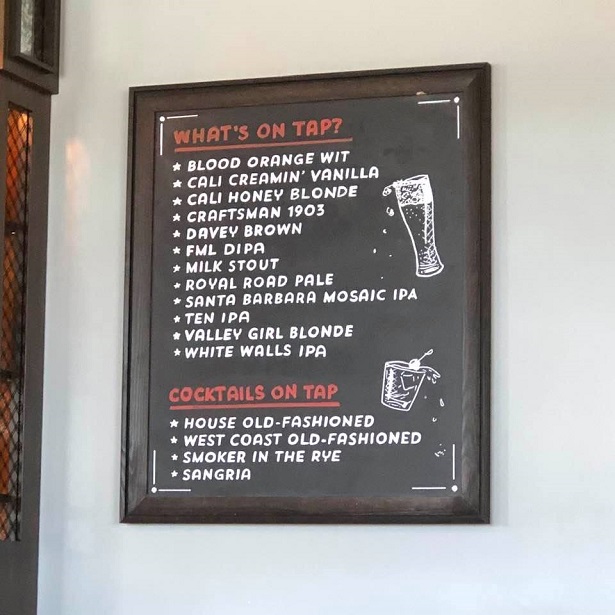 Lastly, since the restaurant is still new, you might want to make reservations as it was packed at lunchtime. For those who don’t mind waiting a little bit, there are several lawn chairs outside along the grassy patch, as well as two cornhole games for you or your little ones to try out!

All in all, we thoroughly enjoyed our meal at Gus’s Barbecue. I can’t wait to go back and sample their other entrees and desserts. The pecan pie sundae sounds yummy! Also, I hear that Gus’s serves breakfast as well. 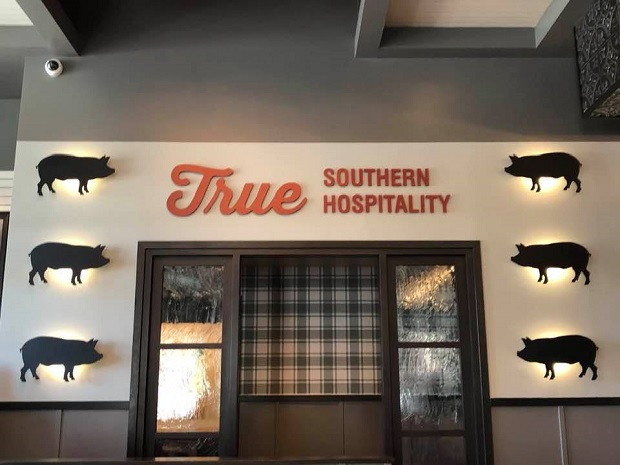 To learn more about Gus’s Barbecue, visit their website here. Also, don’t forget to check out their Facebook page to get the latest updates!

Disclosure: No monetary compensation was received for this post. I received a complimentary meal which helped facilitate this review. All images & opinions are 100% my own.