**Update: Due to the COVID-19 / Coronavirus Pandemic, this event has been cancelled.**

PaleyFest LA takes place March 13-22 and I could not be more excited! Next month the annual TV festival returns to the Dolby Theatre in Hollywood. There are some amazing TV shows that are participating. 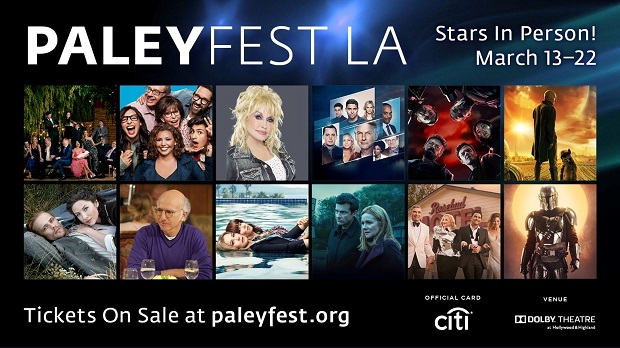 Kicking off the festival is a presentation from America’s favorite family on ABC, “Modern Family.” On March 13 at 7:30pm, the Emmy Award-winning cast along with co-creator and executive producer Steve Levitan, will sit down for what I anticipate being an emotional goodbye.

Calling all Trekkies! On Wednesday, March 18, Sir Patrick Stewart will be interviewed along with other special guests from “Star Trek: Picard.”

I know that Starz’s “Outlander” has a lot of passionate fans. If you’re one of them, then you’ll want to purchase tickets for their panel on Thursday, March 19. Scheduled to appear are Caitriona Balfe (Claire Randall), Sam Heughan (Jamie Fraser), and Sophie Skelton (Brianna Randall Fraser).

The panel that I’m personally looking forward to is Netflix’s “Dead to Me” which takes place on Saturday, March 21. Both lead actresses, Christina Applegate and Linda Cardellini, will be there, along with James Marsden, the show creator & executive producer – Liz Feldman.

Closing out the festivities on March 22 at 7pm is none other than Disney+’s “The Mandalorian.” As of today, those who are scheduled to appear are as follows: Jon Favreau, Creator & Executive Producer, Dave Filoni, Executive Producer, Pedro Pascal (The Mandalorian), Gina Carano (Cara Dune), Carl Weathers (Greef Karga), Ming-Na Wen (Fennec Shand), Ludwig Göransson, Composer, and Rick Famuyiwa, Writer.

Visit the PaleyFest LA website here for a complete listing of TV show panels, dates, and times. All events and participants are subject to change, so you’ll want to follow their Facebook page for updates.