“My Spy” is an action comedy that stars Dave Bautista (Drax from the “Guardians of the Galaxy” movies), Chloe Coleman (Skye from “Big Little Lies”), and Ken Jeong (“Community” and “The Hangover”).

“My Spy” follows JJ a hardened CIA operative (Dave Bautista) who has been demoted and finds himself at the mercy of a precocious 9-year-old girl, named Sophie (Chloe Coleman) where he has been sent undercover begrudgingly to surveil her family. When Sophie discovers hidden cameras in her apartment she uses her tech savviness to locate where the surveillance operation is set. In exchange for not blowing JJ’s cover Sophie convinces him to spend time with her and teach her to be a spy. Despite his reluctance JJ finds he is no match for Sophie’s disarming charm and wit.

I was provided a screener of the movie so that I could watch the film prior to my interview with Chloe Coleman. Chloe’s character Sophie is sassy, yet sweet. Her recently widowed mom is overwhelmed with work and trying to care for Sophie. JJ (Dave Bautista) enters her life at just the right moment, providing her the father figure that she is needing.

I found their on-screen chemistry (as a father-daughter of sorts) very believable. It had me wondering, what was it like working with Dave? Chloe said, “When I first met him, I was a bit intimidated, but after we did the [first] scene, we talked and I really got to know him. He’s not as intimidating as he seems. He is such a sweet person.”

Another actor that she got along well with on set, was her character’s pet dog! I asked Chloe what it was like filming with an animal actor. She replied, “There was actually two dogs that we had there [on set]. I loved working with both dogs. It was my first time working with live animals.” 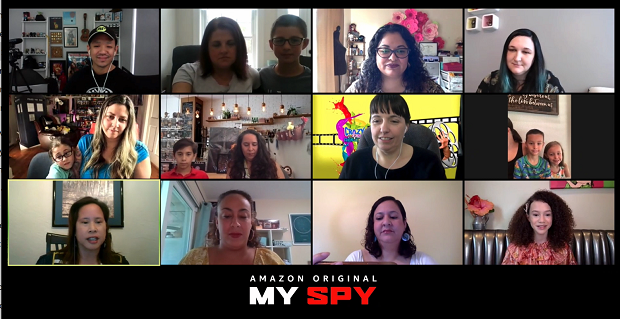 There I am in the lower-left corner, asking my question about the dog!

As you can see from the photo above, there were other bloggers in the roundtable interview. When asked how she is similar to her character Sophie in the film, Chloe replied, “Sophie is a techie and that is something that we have in common. I like using technology to edit.” Earlier in the interview, Chloe explained how she was into animating and uses a computer software called Blender so that she can create 3D animation.

One fun fact that we learned about filming “My Spy” is that they had a swear jar on set. So if anyone said a curse word, the person had to put money into the swear jar. After the movie wrapped, Chloe donated the money to a charity that helps the Amazon rainforest!

That act of charity really demonstrates her passion for causes. When asked about using her platform for the greater good, Chloe responded, “I want to use my voice to help others & make people understand that Black Lives Matter. I believe that Black Lives Matter because I’m half-black. My dad is black & my mom is white & it’s always been important to me. It’s something that everybody should respect & know. I want to be able to use my voice to make sure people know that.”

Overall, I found the movie to be entertaining. It’s funny, action-packed, and best of all, it has heart! My family enjoyed watching it together and it makes for a fun escape especially during these quarantine times! For those with little ones, take note that the movie is PG-13 for slight language and violence.

“My Spy” is available on June 26 via Amazon Prime Video
“My Spy” is rated PG-13.
For more information, visit the Amazon website.

Disclosure: No monetary compensation was received for this post. I attended an online media event which helped facilitate this interview. All images are my own unless otherwise noted. As always, my opinions are 100% my own.