The following ‘American Girl Story’ post was sponsored by KidzVuz for Amazon Studios. All opinions are my own.

American Girl is a company & brand that celebrates girls, encouraging youngsters with aspirational stories & products, and gives little ones the opportunity to learn about another culture or period of time. There is even a store at The Grove (a popular shopping center in Los Angeles), called American Girl Place, where you can shop, have a tea party or celebrate your next birthday inside their cafe! 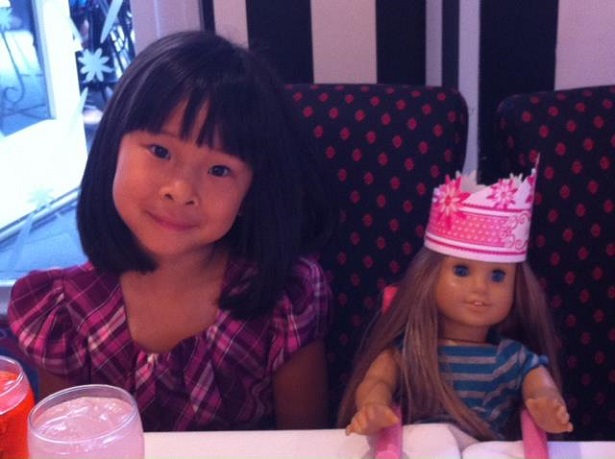 I’m sure many of you are familiar with American Girl dolls. In addition to American Girl dolls & accessories, the brand has books (my daughter has read several of them) & also movies. The latest film, “An American Girl Story – Ivy & Julie 1976: A Happy Balance” premieres Friday, March 24 on Prime Video.

Set in 1976 San Francisco, Ivy Ling is a Chinese-American who struggles to find a balance between her two cultural identities. She wishes to be like her all-American best friend, Julie Albright. When her gymnastics tournament and family’s Chinese New Year dinner land on the same day, Ivy relies on Julie to guide her with a difficult choice.

When I first heard about this movie, I was very intrigued. As an Asian-American who grew up in the ’70s & ’80s, I could instantly relate to the young girl in the movie. My parents encouraged me to take piano lessons, study hard, get good grades & make something of myself. That’s the American way!

I know for me, growing up in a town that was not very diverse, it was a challenge. I was raised in Ventura County before moving to the San Fernando Valley. I always knew in the back of my mind that I was “different” from the kids at my school, which was predominantly Caucasian. Also a lot of them had never heard of the Philippines and/or didn’t know what the difference was between Filipino, Chinese or Japanese. Most of my elementary school friends thought I was Chinese or Hawaiian! For the record, I’m actually Filipino, although my parents were born & raised in Hawaii. (They are Hawaiian, in the same way that I am a Californian.)

But back to the movie…

When we meet Ivy & her family, there is a lot of excitement in the household because of the upcoming Chinese New Year celebration. You see, for the first time since Ivy’s parents wedding, all of the extended family is coming out to San Francisco to visit for the big New Year’s dinner! The only problem is that it’s the same day as Ivy’s All-City Gymnastics Tournament.

Ivy is super passionate about gymnastics. She would much rather spend time on the weekend getting extra practices in, but instead has to accompany her older brother to Chinese school on Saturdays.

After a heart to heart conversation with her grandparents, Ivy learns the true story of how they immigrated to America. It was her grandpa’s grandfather who came to San Francisco to work on the Transcontinental Railroad. After the railroad was built, he decided to settle in America & that’s when he brought over the family (Ivy’s grandfather). Ivy realizes that she wouldn’t have these wonderful opportunities in America if her ancestors hadn’t taken these risks. She is happy to bond with her grandparents but is still confused as to what path to take.

The movie stars Nina Lu who plays Ivy, whom you may have seen in Disney Channel shows like “Bunk’d” or “Disney Monstober.” Playing the role of Julie, Ivy’s BFF, is Hannah Nordberg who has been in “Longmire” & “American Pastoral.” Julie gives Ivy sound advice but we realize that Julie has her own family problems with her divorced parents. Ivy soon learns that people are not defined by one thing.

Does Ivy follow her heart & go to the All-City tournament or does she fulfill her family obligations & spend Chinese New Year with them? You’ll have to watch the movie to find out!

Disclosure: This is a sponsored post, which means that I was provided compensation and/or product in exchange for this post. Images used with permission from Amazon Kids. As always, my opinions are 100% my own.