“Jingle Jangle: A Christmas Journey” is a whimsical movie filled with toe-tapping musical numbers that will have you bobbing your head along with joy. This holiday movie, written and directed by David E. Talbert, is a completely fresh take on the healing power of love.

The movie opens with a grandmother, played by Phylicia Rashad, reading a story to her two young grandchildren. 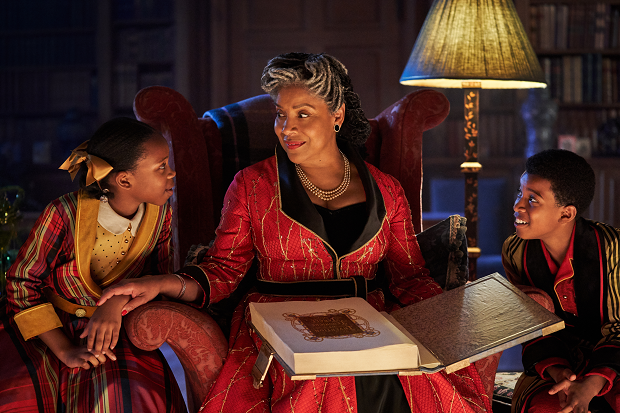 The tale centers on Jeronicus Jangle a toy inventor, who was once the toast of the town but fell on hard times after his trusted apprentice betrayed him. 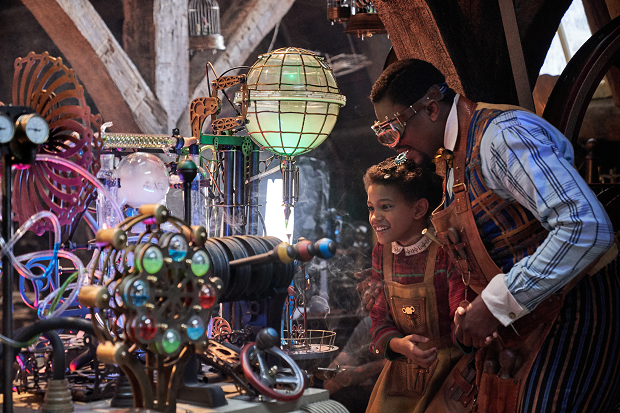 A musical adventure and a visual spectacle for the ages, Jingle Jangle: A Christmas Journey is a wholly fresh and spirited family holiday event. Set in the gloriously vibrant town of Cobbleton, the film follows legendary toymaker Jeronicus Jangle (Academy Award winner Forest Whitaker) whose fanciful inventions burst with whimsy and wonder. But when his trusted apprentice (Emmy winner Keegan-Michael Key) steals his most prized creation, it’s up to his equally bright and inventive granddaughter (newcomer Madalen Mills) — and a long-forgotten invention — to heal old wounds and reawaken the magic within.

Jeronicus has lost hope in his ability to create things and now operates a pawn shop, selling second-hand goods to the people of Cobbleton. Although Jeronicus is a bit of a curmudgeon, there is one person in the town who is determined to make him smile – the bubbly mail carrier, Ms. Johnston (Lisa Davina Phillip). 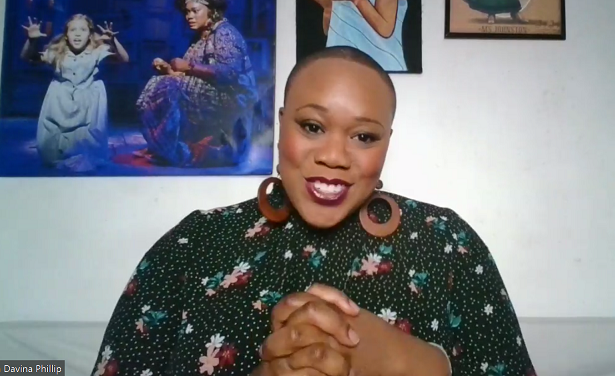 Madalen Mills plays Jeronicus’ granddaughter, the aptly named Journey, who is intent on getting to know her grandfather and restoring his faith. One night, Journey stumbles into her grandfather’s workshop and meets Edison, Jeronicus’ young apprentice (played by Kieron L. Dyer). Together they discover Buddy 3000, a robot that Jeronicus abandoned long ago. 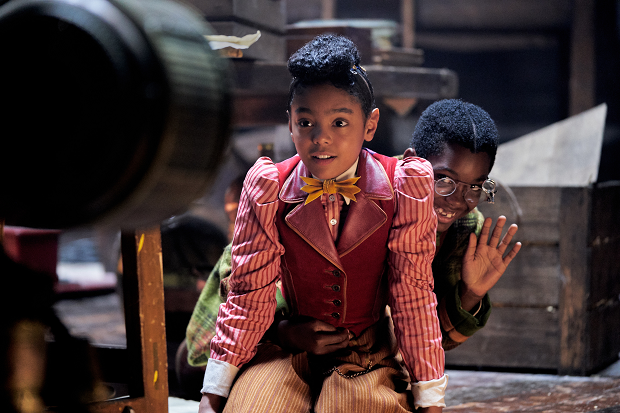 It’s at that moment, that the kids realize that Buddy 3000 could be the answer to Jeronicus’ problems and so they embark on a journey to not only repair the robot but to help Jeronicus revive his creative spark.

There are big musical set pieces throughout the movie. My favorite is when Journey performs a show-stopping song and dance number entitled, “Square Root of Possible.” The diverse cast, colorful costumes, and eye-catching theatrical numbers make this an entertaining and festive movie to watch this holiday season!

Last month, I attended a virtual roundtable interview with the cast and director of “Jingle Jangle: A Christmas Journey.”

When asked what was the message of the movie, writer/director David E. Talbert replied, “Trust that inner voice, those instincts, that dream you have for an idea, a book or song…or anything.” He went on to elaborate that you shouldn’t listen to that person who tries to discourage you. Adding, “The only person that needs to see your vision [and understand it] is you.” 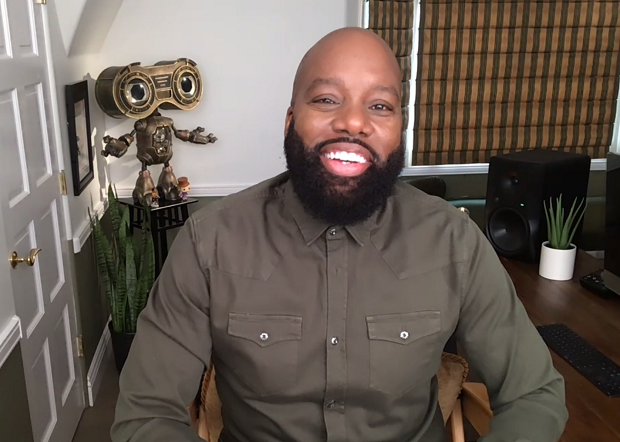 Writer/Director David E. Talbert at press junket, with Buddy 3000 in the background

Also attending the press junket were the two young lead actors, as well as the actress who played the vivacious Ms. Johnston. 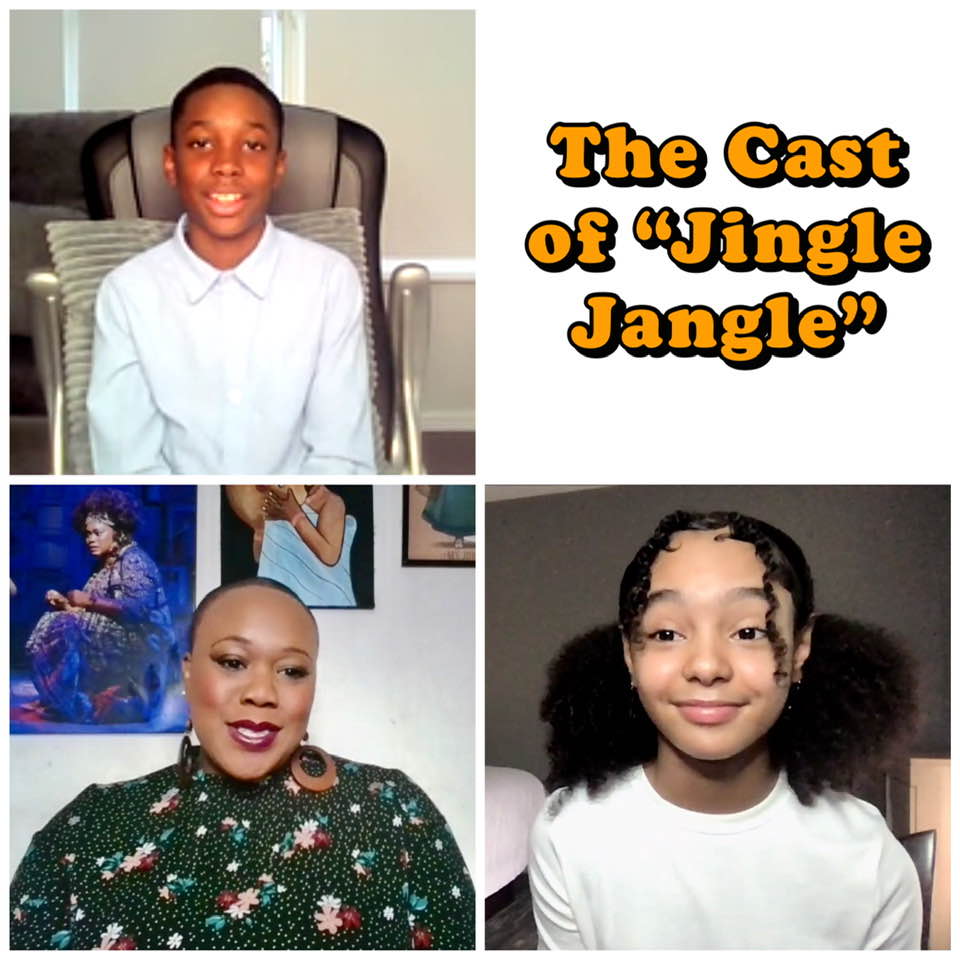 Question: Are you similar at all to your characters?

Madalen Mills (Journey): I’m similar to Journey in that we are both adventurous, feisty, tenacious, intelligent, and creative.

Kieron L. Dyer (Edison): I’m similar to my character in a way that we both can be a bit jumpy sometimes and scared.

Lisa Davina Phillip (Ms. Johnston): I’m similar to Ms. Johnston in that she’s quite warm, bubbly, and light-hearted. I think I brought those kinds of characteristics to her. I was just grateful to be able to breathe life into her and that was a wonderful opportunity.

Speaking of Ms. Johnston, my favorite line in the movie comes from her when she says to Jeronicus, “The magic isn’t in just what you’ve lost, it’s in what you still have.” In my opinion, that message of gratitude and appreciation is just what we need during this time of year! 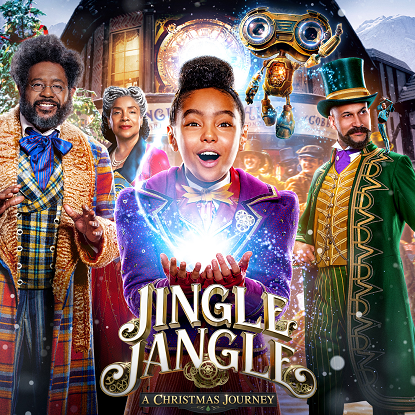 Disclosure: No monetary compensation was received for this post. I was provided a digital screening of the movie which helped facilitate this review. Images used with permission from Netflix. As always, my opinions are 100% my own.