“The Lost Husband” is a film starring Josh Duhamel, Leslie Bibb, and Nora Dunn. It’s based on Katherine Center’s novel of the same name and Vicky Wight is the writer/director of the film.

Earlier this week, I had the opportunity to meet with the cast and creatives of “The Lost Husband” through two separate Zoom interviews that were hosted by The Moms. In speaking with them, I discovered that this movie is sweet and very relatable, as we all quarantine/shelter in place during this challenging time.

Before Josh Duhamel appeared on Zoom, writer/director Vicky Wight shared a “Josh story” with us. However, before I get to that, watch the trailer for “The Lost Husband” because her anecdote references it.

After the sudden death of her husband, Libby is forced to move in with her hypercritical mother. Out of the blue, her estranged Aunt Jean offers an escape: a job and a place to live on her farm in the Texas Hill Country. Before she can talk herself out of it, Libby is packing the minivan, grabbing the kids, and hitting the road. Life on Aunt Jean’s goat farm is more wonderful and more mysterious than Libby could have imagined. Beyond the animals and the strenuous work, there is quiet — deep, country quiet. But there is also a shaggy, gruff farm manager with a tragic home life, a feed-store clerk who claims she can contact her husband “on the other side,” and the eccentric aunt she never really knew but who turns out to be exactly who she needs.

So you know how at the end of the trailer, Josh’s character makes a reference to a rooster not being able to tell time? That was Josh’s improvisation. Says Vicky Wight, “Every time he delivered that line, the entire crew died [laughing].” She explained that they had to film the scene multiple times and the crew cracked up every single time.

To say it was a real treat when Josh Duhamel got online with us via Zoom is an understatement. I had “met” Josh once before at a press junket for “Love, Simon.” For some reason, even though we were all online and many miles apart, this setting seemed even more intimate, yet comfy and casual. 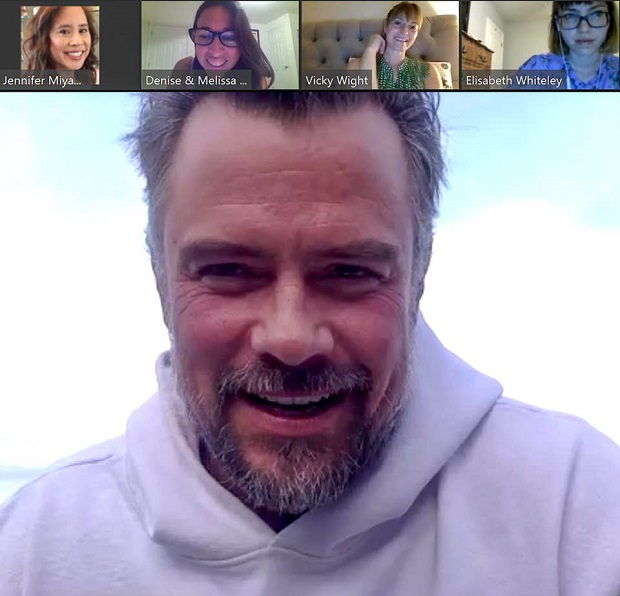 When asked what drew him to the movie, Josh replied that, “I read the script. Then I met with Vicky and I just knew it would be a fun, creative, and collaborative experience.” Filming in a rural area outside of Austin, Texas was a real treat for Josh. He brought his son with him to the set and there was another kid in the movie that was his age. They got to play all of the time and his son even learned how to milk a cow! 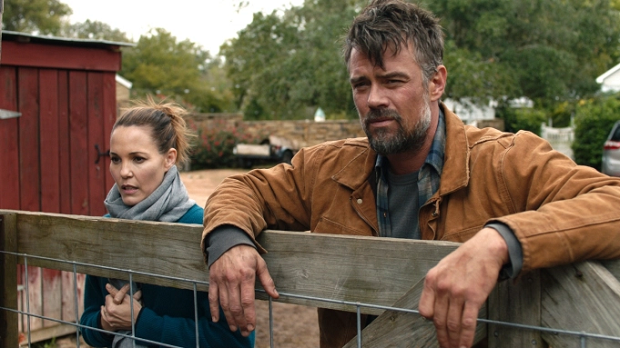 The character Josh portrays in the movie is very similar to how he lives in real life when he goes up to his cabin. Josh went on to explain how he owns a very simple cabin in Minnesota and that when he visits, he enjoys chopping wood and working on the land.

At the beginning of the Zoom interview, Josh’s son wandered into the shot. Apparently he wanted to say “hi” to the moms. That got a chuckle out of everyone! Josh went on to say that he often takes his son with him when shooting on location, especially if it’s out in the country. Those trips, along with visits to their Minnesota cabin, provide great bonding experiences and helps his “city kid” learn about life in a small town.

That slow-paced lifestyle is exactly what this movie is all about. Explains Vicky, “The coming together and the quietness of it [country living], and the space you find when you disappear from that life you once had – it’s all in the movie.” I don’t know about you, but those themes are something we can all relate to right now as we slow down and get back to the basics.

During the Zoom interview, I got to ask Josh a question. I wanted to know what it was like working with Leslie Bibb and if he had met her prior to the shoot. Said Josh, “I had not worked with her before this, but I met her briefly many years before.” Adding, “I was a fan of her in a lot of the comedy stuff that she had done. We had a blast and she’s very talented.”

Nora Dunn plays “Aunt Jean” in the film and she joined our Zoom interview from her Chicago home. When asked what drew her to the film, Nora replied, “It was a beautiful script and a wonderful part.” Adding, “It’s a thoughtful piece that’s about loss and what you do with it.”

Speaking of loss, we had asked Nora what she was working on prior to the quarantine restrictions due to the coronavirus pandemic. Nora had been in the middle of rehearsals for “The Most Spectacularly Lamentable Trial of Miz Martha Washington” play at the Steppenwolf Theater in Chicago. The play was supposed to open on April 2nd and they had already sold 500 seats for opening night. While the play is shut down for now, according to Nora there are plans to bring it back for 2021.

When I asked Nora what was it like to work with Leslie Bibb and Josh Duhamel, she responded, “They’re both such great actors and are very funny. Leslie has a great sense of humor and Josh is so warm and down-to-earth.”

Vicky added that Leslie was very instrumental in getting the project made, saying that “Leslie knows everybody and was involved in the casting and shaping of the story.” Leslie Bibb earned a producer credit on the film.

While I haven’t read the book, nor have I seen the movie yet, it sounds like a film that is perfect for watching at home. Said Vicky, “It is uplifting, has good messages in it, and is family-friendly.” Nora also chimed in and said that “There are so many wonderful moments in the movie and there is never a false moment.”

Disclosure: No monetary compensation was received for this post. I attended an online event hosted by The Moms which helped facilitate this interview. All images are mine unless otherwise noted. Images used with permission from Six Foot Pictures. As always, my opinions are 100% my own.