Last month I attended the PaleyFest Fall TV Preview where I got to watch three new Fall TV shows that will air on the ABC Network. I wrote about A Million Little Things recently & you can read my review here. 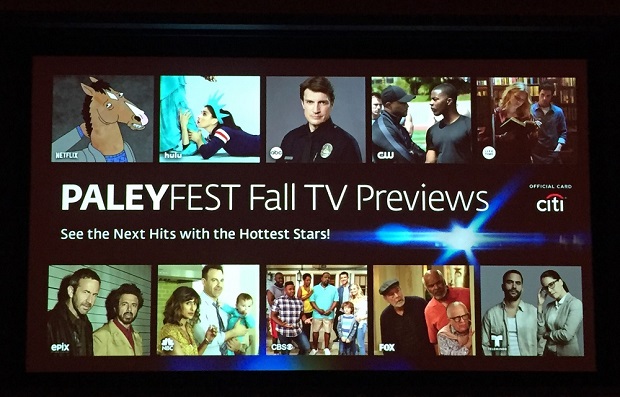 There are two shows that will premiere next Tuesday on ABC: The Kids Are Alright & The Rookie. 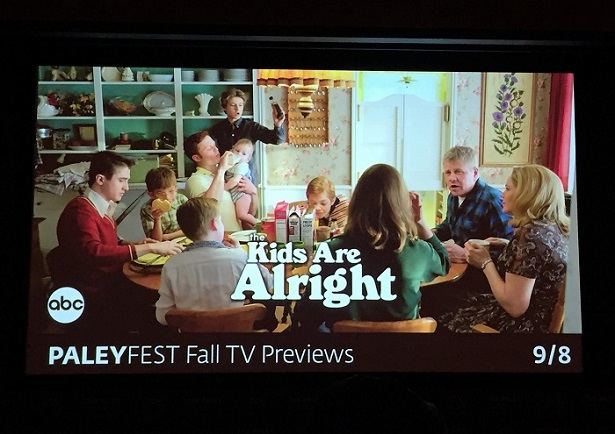 The Kids Are Alright is a new comedy that premieres on Tuesday, October 16 at 8:30pm. The show is an instant appeal to me because it is set in the 1970s, the same decade that I grew up in, so I can totally relate. 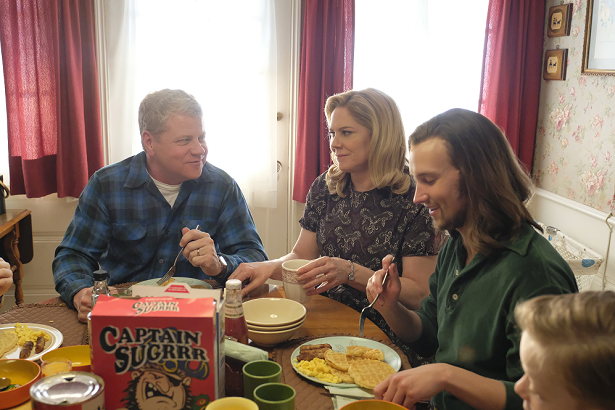 Set in the 1970s, this ensemble comedy follows a traditional Irish-Catholic family, the Clearys, as they navigate big and small changes during one of America’s most turbulent decades. In a working-class neighborhood outside Los Angeles, Mike and Peggy raise eight boisterous boys who live out their days with little supervision.

After watching the pilot episode, a few cast members & the creator came out for a Q&A moderated by Jim Halterman of “TV Guide Magazine.”

During the panel we learned that the show was inspired by Tim Doyle’s experience growing up as part of a large Catholic family in Glendale, California. Tim grew up in the 70’s & had seven other brothers (he was the fifth of eight boys). Naturally there was a lot for him to draw from in making this TV show. Tim was glad that the network didn’t make him change the LA location from the pilot. Fortunately the folks at ABC wanted him to stay true to his childhood.

At first blush, you might think of this as a show similar to The Wonder Years (which took place from 1968-1973). However, The Kids Are Alright is very authentic to the 1970’s time period, as Tim would often ask himself during the writing process, “How did it happen?” and/or “What did you feel?”

You probably know Mary McCormack from past TV shows like The West Wing or House of Lies. When asked which she preferred comedy or drama, Mary replied, “I like doing both [comedy & drama]. I really just look for good writing. This is a great part. [Tim] wrote a great part for a woman.” 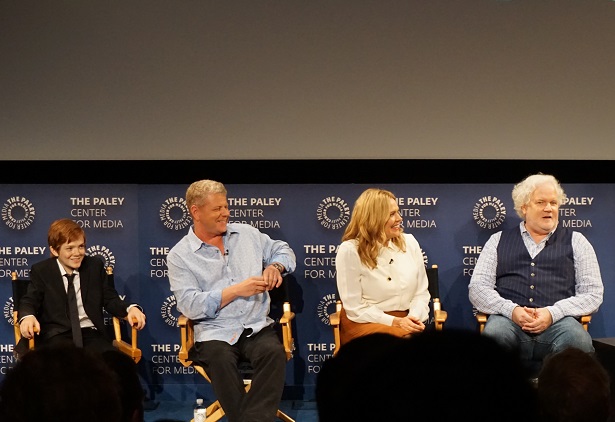 Did Mary connect with the character? Mary said that she can relate to the hectic atmosphere, having come from a big Irish Catholic family. She has 50 first cousins & they all lived close. So she understands that kind of house [on the show] & the energy in a house like that.

The show is very funny & cute. There are house, costumes & even the food they consume on the show is very much the 70’s. I personally enjoyed The Kids Are Alright & I can’t wait to watch more episodes after it premieres next Tuesday.

Next up is The Rookie which premieres on Tuesday, October 16 at 10pm. 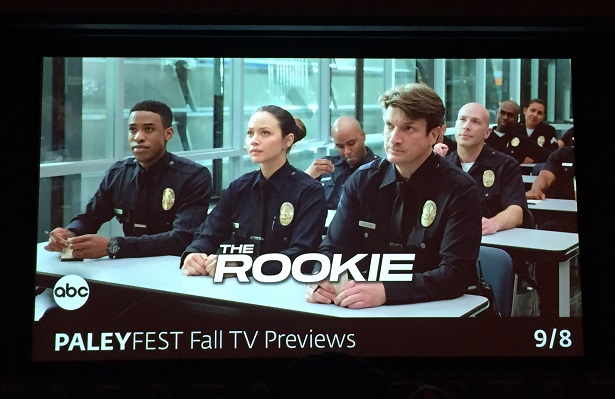 Nathan Fillion plays John Nolan, the oldest rookie in the LAPD. At an age where most are at the peak of their career, Nolan cast aside his comfortable, small town life and moved to L.A. to pursue his dream of being a cop. Now, surrounded by rookies twenty years his junior, Nolan must navigate the dangerous, humorous and unpredictable world of a “young” cop, determined to make his second shot at life count.

Now from the marketing promos, you might think that this show is completely centered around Nathan Fillion but the reality is that The Rookie is truly an ensemble show. I watched the first episode & the show has such a great cast. In fact, following the screening, we were introduced to all of them during a Q&A moderated by Kate Hahn of “TV Guide Magazine.” 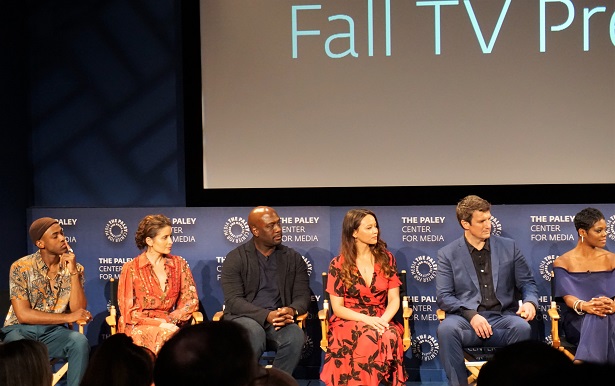 I was blown away while watching the first episode. There’s action & humor as well. It’s not your typical cop show or a “crime of the week” police show – it’s very much a show about second chances & also a show about relationships.

Actress Afton Williamson plays Talia Bishop, a training officer (they refer to it as “TO” throughout the show). Her character is strong & she has layers. Said Afton, “It’s something we are seeing across the board on television where women are given permission to be ourselves & we don’t have to change that or water it down.” 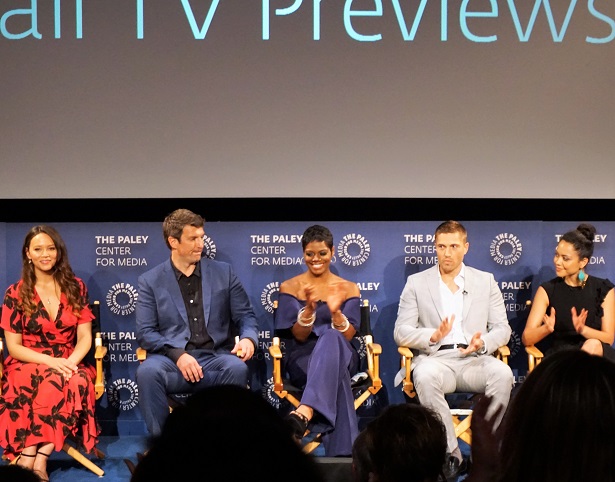 Actor Eric Winter (shown in the tan suit in the above photo) plays Officer Tim Bradford. He talked about doing a few intense “ride alongs” with police officers so that he could get some research & background. He has a lot of appreciation for what police officers do. The cast in general talked a lot about the pressures that police officers have to deal with. The job is difficult & while a lot of it is using your instincts & being present, police officers are also trained to NOT react.

They also joked about the crazy bruises & bumps that they get from doing the action stunts on the show. Joked Nathan Fillion, “I got a crazy bruise on my leg from being on that fence. I dipped myself in Bengay [pain relief cream] after work.” Once you watch the first episode, you’ll know what he is talking about. 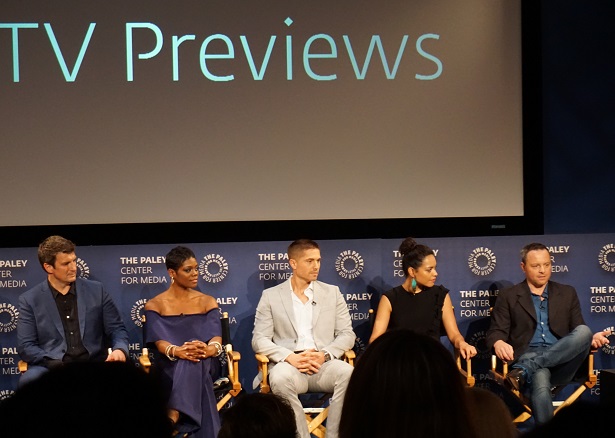 All in all, the show is really interesting, it’s action-packed & there’s a bit of romance & humor as well. I’m going to continue watching it to see where Nathan’s character ends up.

Thanks Paley Center for Media for letting me attend PaleyFest!