Now that it is mid-September, that means Halloween is around the corner. It’s time to break out the pumpkin spice everything and to watch scary movies leading up to the holiday! A new movie called “Nightbooks” just dropped on Netflix and it’s based on the popular middle grade novel by J.A. White.

The movie follows Alex, a boy who is obsessed with writing scary stories. After he overhears his parents talking, he gets upset and storms out of his apartment. Shortly thereafter, he becomes imprisoned by an evil witch in the NYC building that he lives in.

Alex (Winslow Fegley) is a creative boy with a strong passion for writing scary stories. But when he’s labeled weird and rejected for what he likes, he swears he’ll never write again. That’s when an evil witch (Krysten Ritter), captures him in her magical apartment in New York City and demands that he tell her a new tale every night if he wants to stay alive. Trapped inside with Lenore, the witch’s spiteful cat watching his every move, Alex meets Yasmin (Lidya Jewett), another young prisoner who has learned how to survive the witch’s wicked whims. With Yasmin’s help, Alex must learn to embrace what makes him unique — his love for scary stories — and rewrite his own destiny to break them free.

Recently I had the opportunity to interview the cast of “Nightbooks.” I had a blast meeting Winslow Fegley, Lidya Jewett and Krysten Ritter and learning more about their experience in “Nightbooks.”

The movie has some frightening scenes and jump scares that may be a little intense for young kids. So I wanted to know from Lidya if she liked watching scary movies herself. 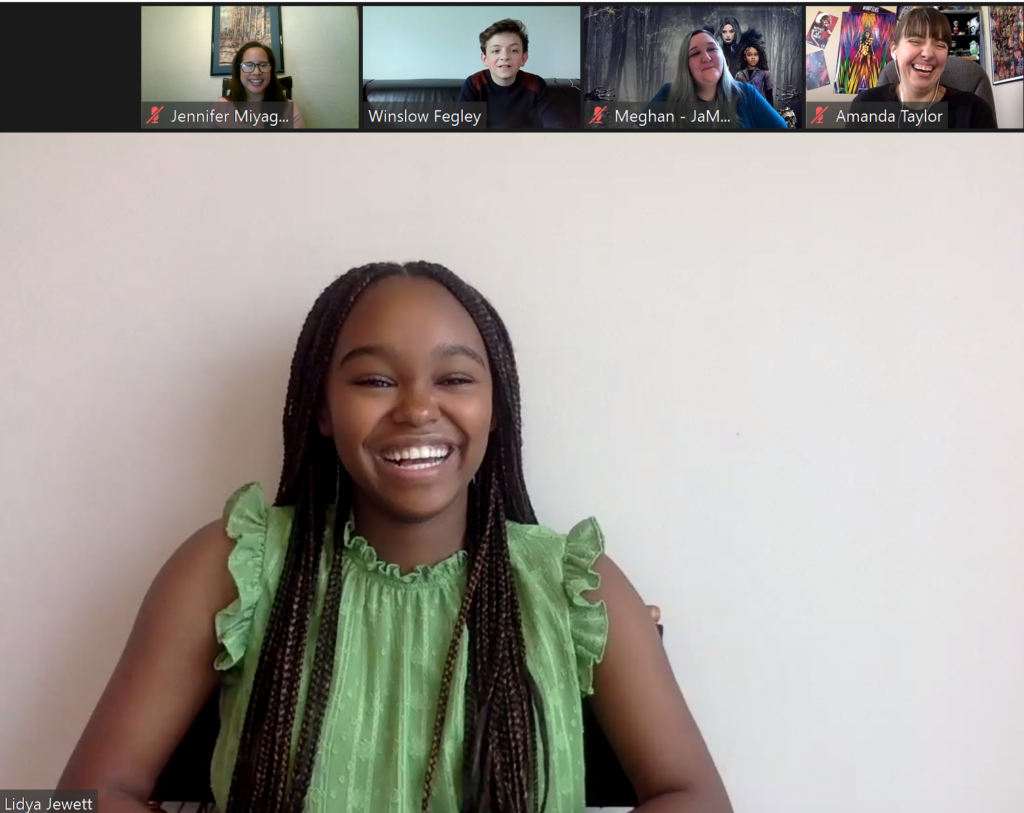 Said Lidya, “I am not a big fan of scary movies. I get scared very easy, but I do love reading scary books. I love Ray Bradbury and all of his October [The October Country] stories.”

One of my favorite scenes in the movie involves a night garden scene with some scary critters. I won’t reveal any spoilers, but the actors are covered in a gooey substance. I couldn’t help but wonder what it was like filming that scene.

“It was crazy,” said Winslow. “We had to be covered head-to-toe in goo. It was fun but after a while the [substance] would harden up and get really itchy.” 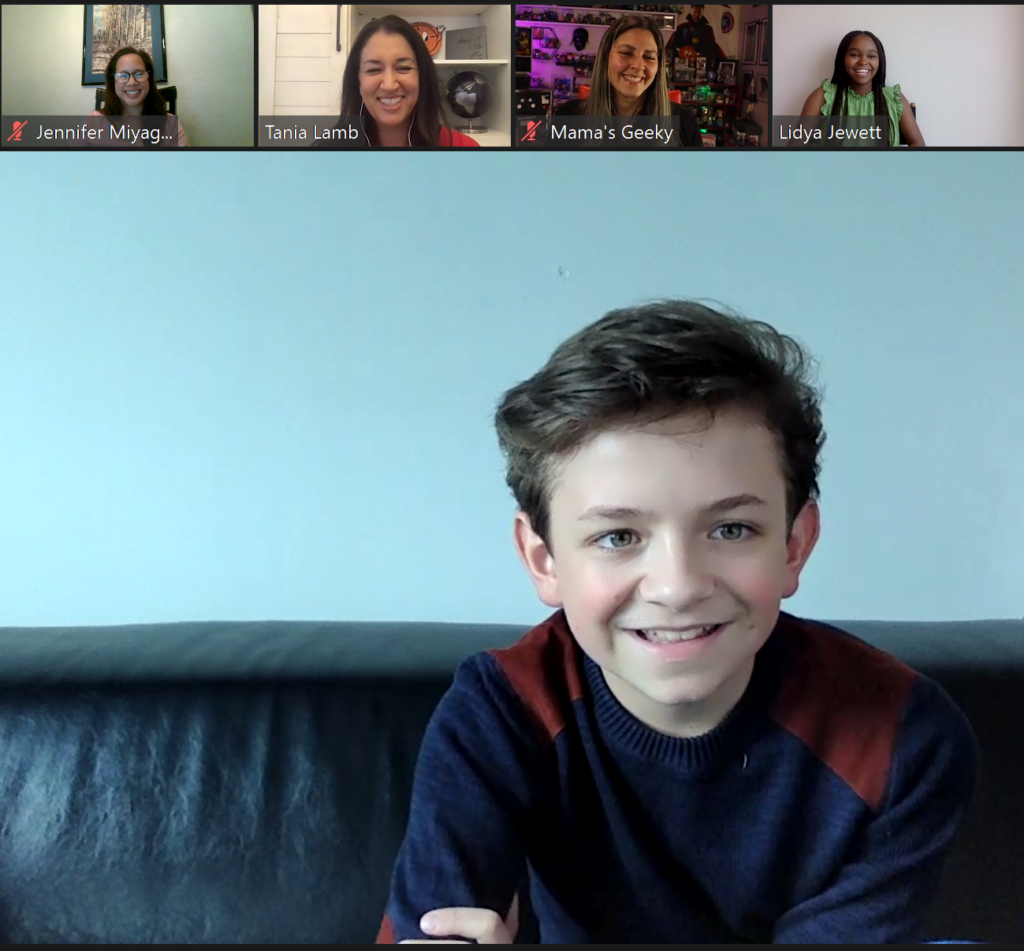 Adding Lidya, “They would spray us with this water bottle to keep it wet.” Wow, talk about working hard for your craft! 😉

Now as you can see from the movie stills, Krysten Ritter’s character gets to wear outrageous outfits and has colorful hair. 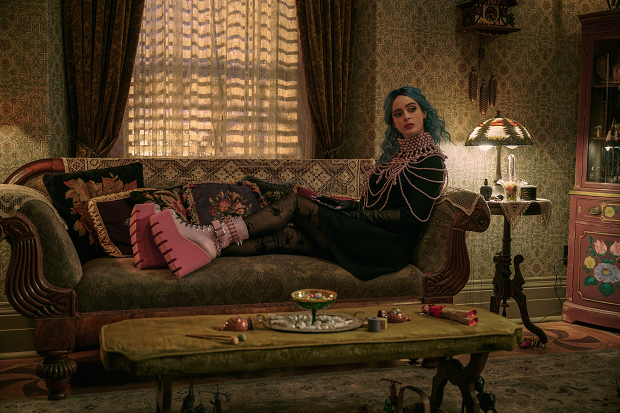 Krysten’s performance in the film is really strong and during her interview, we learned that she had a lot of fun playing this character.

When asked about the significance of the movie, Krysten said, “That thing that he [Alex] got picked on at school is actually what makes him awesome. I think that’s a message that is so great for kids and adults.” 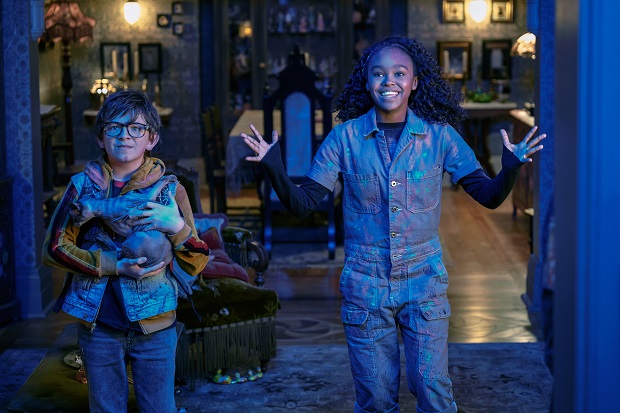 The movie serves up some scary fun and has a good message. If you’re looking for a spooky family movie to watch this Halloween season, “Nightbooks” is it! 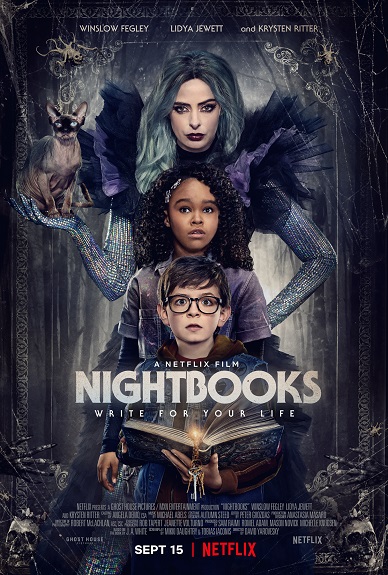 Disclosure: No monetary compensation was received for this post. I was provided a digital screening of the movie and attended a virtual media event which helped facilitate this review. Images used with permission from Netflix. All images & opinions are my own unless otherwise noted.