Tully is film that takes an unflinching look at motherhood. Recently I watched an early screening, along with other mom bloggers & influencers at a special event in Culver City. 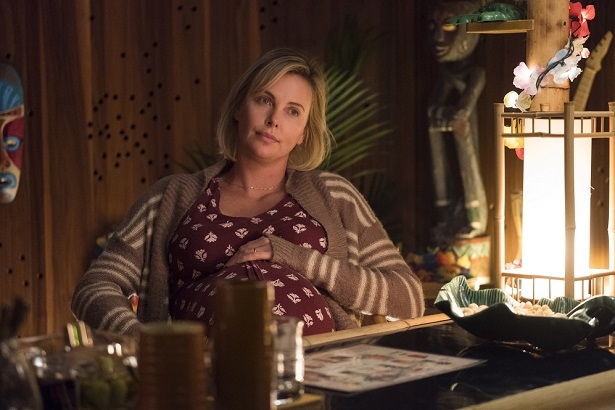 Charlize Theron plays Marlo, a harried mom of two children with a baby on the way. We see her going through the motions of making dinner, school pick-up & drop-off. As she gets closer to her due date, you can see the exhaustion written all over her face, especially as she deals with her younger son’s quirky outbursts.

After Marlo’s baby is born, her rich brother Craig (Mark Duplass) offers her a gift that she initially rebuffs but ultimately gives into – a night nanny. It’s a good thing too because Marlo’s husband Drew (Ron Livingston) is well-meaning but at times seems to have mentally checked out.

Enter Tully (Mackenzie Davis), a free-spirited young woman who saves Marlo from spiraling downward. She swoops in at night, taking care of Marlo’s baby girl, somehow managing to clean the house & even bake cupcakes in the wee hours – much to everyone’s delight.

A new comedy from Academy Award®-nominated director Jason Reitman (“Up in the Air”) and Academy Award®-winning screenwriter Diablo Cody (“Juno”). Marlo (Academy Award® winner Charlize Theron), a mother of three including a newborn, is gifted a night nanny by her brother (Mark Duplass). Hesitant to the extravagance at first, Marlo comes to form a unique bond with the thoughtful, surprising, and sometimes challenging young nanny named Tully (Mackenzie Davis).

Tully manages to feed Marlo’s soul, so that she can slowly regain her sanity. Their on-screen relationship is honest & believable, not to mention their performances are wonderfully raw & authentic.

Tully is an intense look at the joy, struggles and challenges of motherhood. As a mom, I could very much empathize with Marlo & her journey. Without giving too much away, the movie takes a surprising detour in the last 30 minutes. Overall the movie is heartbreakingly funny & bittersweet all at the same time. It’s an unvarnished look at being a mom – warts & all.

Disclosure: No monetary compensation was received for this post. I attended an advanced screening of the movie which helped facilitate this review. Images used with permission from Focus Features. As always, my opinions are 100% my own.