When you hear the name Ally Hilfiger, you naturally think of two things – that she is the daughter of fashion designer Tommy Hilfiger and that she was a one-time reality starlet on MTV’s “Rich Girls” which aired back in 2003. She’s moved on from that time period in her life & it is all detailed in her memoir, “Bite Me: How Lyme Disease Stole My Childhood, Made Me Crazy, and Almost Killed Me.” 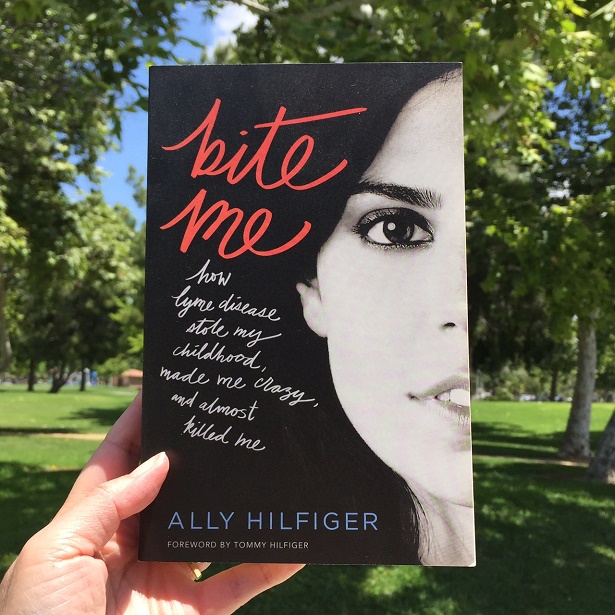 The book is separated into three parts, with a forward written by Tommy Hilfiger. In the first section of the book, Ally details her early childhood life, living in Connecticut. She also briefly touches on her parents humble beginnings, first living in upstate New York, then migrating to the East Village, where both Ally’s dad & mother worked in the apparel industry, creating their own fashion lines. However, it was right around the time that Tommy’s line took off, when her mom Susie took a step back from her career to raise a family.

Ally weaves in facts about Lyme disease, all while recounting her tumultuous childhood – seeing a therapist at age 6 (her parents wanted to offer her emotional support as Tommy’s successful business grew), having emotional outbursts at around age 7 or 8, not being able to complete her homework in 4th grade & having confrontations with her teacher. In hindsight, Ally now knows that these are side effects of having Lyme disease. She recounts how she discovered the tick on her body, how her mom took it off of her with tweezers & had both the tick & Ally tested for Lyme. The tests came back “inconclusive.” However, did you know that studies show that 50% of commonly used Lyme testing misses positive Lyme cases?!

Towards the end of part one, Ally talks about meeting with MTV producers, who had seen her local Nantucket TV show “In the House with Ally Hilfiger.” Ally had created, produced & starred in that show, where she took her video camera around the island & asked the summer residents questions about their home décor, fashion & lifestyle. MTV was enamored by her spunk & wanted to make her a VJ but Ally had a different idea – she wanted to produce a show for the network. Enter Jaime Gleicher, Ally’s high school friend who helped her write the treatment of what eventually became “Rich Girls.”

During the filming of “Rich Girls” Ally was struggling with her Lyme disease (although she didn’t know that it was Lyme at the time). Plagued with headaches, joint pain, fevers, vision problems & an inability to focus – this contributed to her erratic behavior on the show, which many people (myself included) chalked up to her being a privileged girl who was just acting out. What many don’t realize is that Lyme disease is one of those invisible illnesses, where the person seems fine on the outside, but is suffering from symptoms that many people are unaware of (similar to Lupus or Fibromyalgia). What I also didn’t know when I was watching the show is that the series was originally intended to have a more serious tone. Ally & Jaime’s original pitch centered on NYC teens (kids of the one percenters) who suffered from real issues like parental neglect, eating disorders, prescription drug addiction, etc. Instead, the show focused on the more material aspects of living on the Upper West Side in Manhatten.

In part two of the book (which is the shortest section), we find out that shortly after “Rich Girls” aired, Ally was committed to a psychiatric hospital by her father. By the age of 18, Ally had taken to self-medicating with weed & alcohol to mask the pain that she was feeling. Tommy Hilfiger was deeply worried about his troubled daughter & this was a last ditch attempt at getting her help. Lyme disease is often misdiagnosed by doctors & that is exactly what happened to Ally until she met Dr. Shander, who assessed that her symptoms sounded like Lyme & encouraged her to see a specialist.

Ally shares her road to recovery in part three of the book. She sought treatment from eleven different doctors, from a Chinese doctor who treated her with Eastern medicine to a German doctor who claimed to have a 100% success rate. Once her health stabilized, she began to put her energy into a familiar creative outlet – the fashion industry.

While attending a NYC art show, Ally was introduced to Steve Hash & the rest is history. She moved to Los Angeles, gave birth to their daughter Harley & continues to shine a light on Lyme disease through her work on behalf of the Global Lyme Alliance.

The book is a fascinating account of Ally’s resilience in dealing with Lyme disease. On a side note, I read online that Ally got married last month to Steve in an island ceremony & that their daughter was the flower girl. Congrats to the happy couple!

“Bite Me: How Lyme Disease Stole My Childhood, Made Me Crazy, and Almost Killed Me” can be found wherever books are sold. For more information, check out the publisher’s website, Hatchette Book Group. 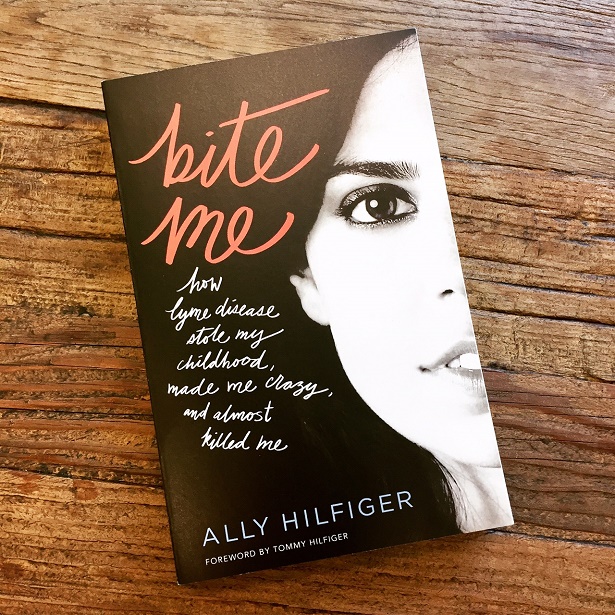 Disclosure: No monetary compensation was received for this post. I received a complimentary book which helped facilitate this review. My opinions & images are 100% my own.