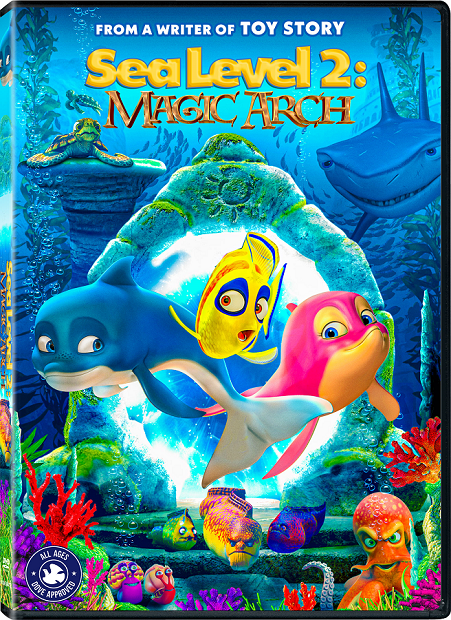 “Sea Level 2: Magic Arch” is about two sea animal friends who make an amazing discovery. Just under the surface of the ocean, lies an ancient civilization, that is just waiting to be found. When Dephi the Dolphin stumbles upon it, chaos ensues, and a magical transformation occurs!

This thrilling, colorful comedy will take your family under the sea to a land of courage and adventure. One day, Dephi the dolphin discovers a magical archway that grants wishes to all who visit. But evil moray eels use the arch to become gigantic and menace peaceful Fish Town. Now, Delphi must summon his courage, master his “secret punch” fighting technique, and find his missing father to rescue his friends and win the love of pretty Mia. It’s time for this dolphin to get swimmin’!

To celebrate the movie’s release, I’m hosting a giveaway contest! How would you like to win a DVD of this double feature containing “Sea Level” and “Sea Level 2: Magic Arch”?

Five (5) Real Mom of SFV readers will each win this prize pack. Please enter below for a chance to win.

Rules: United States Residents ONLY. One prize per household. Five winners will be randomly selected via RaffleCopter and notified via email. Each winner must respond within 48 hours to claim the prize or a new winner will be chosen via RaffleCopter. The prize will be fulfilled directly by the sponsor. If you have any additional questions, please feel free to send me an email to realmomofsfv@gmail.com.

So tell me, if you win this Sea Level prize pack, who will you give it to?

Disclosure: No monetary compensation was received for this post. Lionsgate is generously sponsoring this giveaway contest. The images shown in this post are used with permission. As always, my opinions are 100% my own.